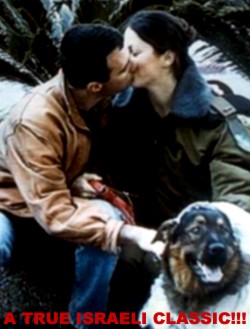 A personal account of middle-class Jewish life in Tel Aviv during the Palestinian uprising by a young Israeli filmmaker. Just out of the army and enrolled in film school, Dan is looking for material. A lighthearted on-camera interview with his grandmother turns serious when they hear that his sister may have been a victim of an Intifada bus-bombing, which prompts his grandmother to relive the assassination of Dan's grandfather by terrorists in 1972.

In search of "privacy in the crowd", Dan takes his camera to the streets, where he reveals his hopes for peace. "I feel like I can't get away from the army," he tells us. He wants a serious girlfriend--but falls in love with Iris, a "pre-army girl," who is about to do her obligatory military service. Dan and Iris must come to terms with their relationship in the shadow of the 1994 Arab-Israeli Peace Process and the assassination of Prime Minister Yitzhak Rabin.

Technically proficient, the film nevertheless retains the immediacy of an autobiographical film-school project, including home movies of Dan's Bar Mitzvah and a soundtrack of klezmer music and vintage Edith Piaf songs. But Dan and Iris are very appealing and believable characters, whose "childhood in the shadow of the shelters," requires that they have an ambivalent relationship with the army.

Recommended for secondary school and college media collections. Will be especially valuable to social studies programs by providing a look at recent Israeli events from a personal perspective.