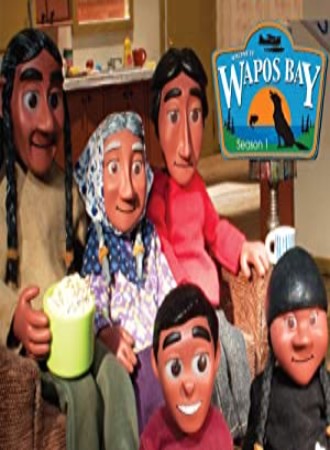 The Wapos Bay movies are a stop-motion animation series that follows the adventures of 3 kids from a Cree community in northern Saskatchewan, located in western Canada between the Canadian provinces of Alberta and Manitoba, and directly north of the U.S. states of North Dakota and Montana. This type of animation is similar to the famous movie in 2000 named Chicken Run, a British-American stop-motion animation family comedy film that became a hit here in the United States. The film received very positive reviews, and was a box office hit. The six DVDs in this collection are filmed in English, French and Cree (with English subtitles) and are about 24 minutes in duration each. Also included with the DVDs, in PDF format, are study guides for each episode. (These are also available on the National Film Board web site.) Study guides include an episode summary, background information, key themes, pre and post-viewing activities, and project ideas, which include art, writing, drama and research. These guides offer good ideas to spark discussion, divergent thinking and creativity for classroom teaching.

Aboriginal filmmakers Dennis and Melanie Jackson’s attractive characters come alive with the voices of well-known Aboriginal performers such as Gordon Tootoosis (North of 60 (2005), Legends of the Fall(2000)), Andrea Menard (The Velvet Devil) and Lorne Cardinal (Corner Gas(2004)). Wapos Bay is a fascinating, and often humorous portrait of a northern Aboriginal community from the perspective of its children. While I found these short children’s films good, unless an instructor gives background information on Aborigines, Treaty Days, jigging, moccasin telegraph, cultural identity, much of what is going on in each of the films and some of the conflicts each of the children face may be lost even on a basic level.

In episode 14, Mother Earth, Raven’s teacher assigns a research report on identity. Raven does some research at the library and also talks to Kohkum Mary, Uncle Jacob, Chief Big Sky and her mother, but she only gets more and more confused with some of the terms she learns, some examples of which are Aboriginal, Indigenous and Métis. In the meantime, T-Bear and Talon help Old Man Gabriel to prepare for a sweat lodge ceremony by gathering rocks and cutting wood. Their assistance is rewarded by their being given the names Spirit Walker and Wing Brother. Raven realizes that her identity is shaped by many factors, her culture being just one of them, but what is most important is that she is much loved by her family.

In episode 15, Going for the Gold Talon is preparing for the North American Indigenous Games (NAID). Talon dreams of a talking dog who tells him that he can bring pride to Wapos Bay by winning a gold medal in the NAID. So T-Bear and Devon help Talon with his training; Kohkum Mary adds to the rather distinctive training methods. In the next dream, the dog spirit brings Talon a golf club; Talon enlists the help of Uncle Jacob who has a great deal of golf experience. T-Bear becomes jealous of all the attention that his dad is paying to Talon and becomes very upset when his uncle forgets his birthday. The father-son conflict becomes obvious and is resolved at the end of this episode which could be a learning moment for the viewer. There is a scene where children are shown walking along a railroad track which in real life can be dangerous given the number of train track related fatalities indicated by many cities across the country.

Episode 16, Raven Power, deals with the inequalities between the men and women of Wapos Bay, and that the women do not get the respect that they deserve. Raven notices this and takes up the cause; she tells Chief Big Sky, but he does nothing about the situation. Raven then goes to the female elders of the community with her concerns and issues, and they are spurred into action. The women gather at a large campsite, leaving the men to fend for themselves. Though the women fare very well, the men do not because they have relied on their women to do the cooking, cleaning and washing. Over the next few days, while the women enjoy delicious food, morning yoga, music and storytelling, the men, with the exception of Jacob, cannot even make a simple breakfast for themselves. Jacob makes a plea to the women via the Wapos Bay’s radio station, inviting them to talk to them about the impasse. Raven then calls the station with a list of the women’s demands to which the men agree.

Episode 17, called Lights, Camera, Action! Introduces the viewer to Mr. Darian, a teacher, who gives a video project about what Treaty Days mean to his students; Adam evaluates the project proposals. Talon and Devin want to make a documentary in which they interview the elders of Wapos Bay to find out how they have been affected by the treaty; T-Bear would rather create an action-adventure film about the signing of the treaty. Adam likes both ideas, and so the rest of the students choose which of the videos they wish to work on. T-Bear wants a perfect presentation but his enthusiasm starts to wear thin on his group; as a result most of the kids quit and wind up on Talon’s team. What happens next is that the projects of both teams are not good at all, so Adam suggests that the boys combine their footage to create one longer documentary which turns out to be very popular. Meanwhile, Raven feels neglected on account of all the excitement over the film-making, especially since the subject of the film, Treaty Days, is supposed to be all about the importance of family and spending quality time together.

Episode 18, called Dance, Dance, shows T-Bear enrolling in a community wrestling class, but he is drawn to the Métis jigging class which is held on the same evening. Jacob, who was once a member of the university wrestling team, obviously wants T-Bear to take up wrestling and even gives him his old wrestling trunks. T-Bear wears the trunks to the dance class where he shines at jigging. Eventually, Jacob finds out that his son has lied to him, prompting a father-son talk. In the meantime Raven and Talon take karate lessons. Through the “moccasin telegraph,” they learn that their parents are expecting a “bundle of joy,” but instead of a new baby brother or sister, the bundle turns out to be some puppies.

Episode 19, Raiders of the Lost Art, deals with the issue of graffiti and restitution. On a school field trip, the class discovers ancient petroglyphs on some rocks, so this area is then labeled as a protected area. Wapos Bay is experiencing a rash of vandalism, but, when Devon, T-Bear and Talon overhear some teenagers planning to spray paint graffiti on the rocks bearing the petroglyphs, they decide to take matters into their own hands and catch the teenagers in the act. They enlist the help of the Norsemen, a group of technicians working in Wapos Bay, who have night vision goggles and other stealth equipment. The boys catch the teens, but the teens, being older and stronger, tie the boys to a tree. Officer Musqua and other community members eventually rescue the boys. As restitution, the teens have to wash the graffiti off all the houses they have spray painted; T-Bear then makes a suggestion that everyone has a right to express themselves with the end result being that the teens are asked to create a mural for the school.