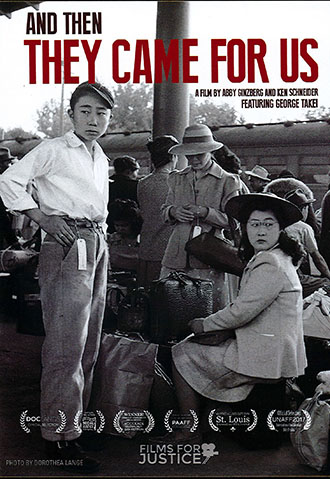 Documentaries abound about the persecution of the Jews, the Poles, the Russians, and other groups of people identified by the Axis powers as undesirables and enemies during World War II. Far fewer non-fiction films explore the history of the persecution of Japanese-Americans—both naturalized citizens and those born in the U.S. Thousands of people—men, women, and children—were forced out of their American homes and taken to live in camps surrounded by barbed wire and guarded with armed guards by the U.S. government. Though it freely admits its list is incomplete, Wikipedia names fewer than 100 film titles of about the Japanese-Americans, whereas it has many, many more, organized by year, about the fate of Jews during the Holocaust. The word “Holocaust” has come to stand for government-sponsored persecution of groups of people seen as enemies of the state.

This is a powerful film, though it is not perfect. It opens with scenes from a 75th anniversary rally in which Satsuki Ina reads the poem “And Then They Came for Me” by German Lutheran pastor Martin Niemöller, substituting “Us” for “Me.” Niemöller castigated fellow Germans for not speaking out when Adolf Hitler persecuted the Jews, but the parallels with what non-Japanese Americans did to fellow Americans of Japanese ancestry leap to mind as Dr. Ina speaks. During the same event, another speaker wearing a hijab comments as television clips show Donald Trump using the “national defense” argument to demand that Muslim immigrants be registered upon arrival in the U.S. Registering all West Coast Japanese-Americans was the first step Roosevelt’s administration took in the process of interning more than 100,000 of them here in the U.S.

Perhaps the best known of the film’s interviewees is George Takei, who played the role of Mr. Sulu in television’s original Star Trek series. He was born in one of the camps. Interviewees include Dr. Ina, Yale professor Gary Okihiro, physicist Bruce Tsuruta, Reverend Saburo Masada, and others. Technically, this is one of the best documentaries this reviewer has seen, well-edited, well-paced, and forcefully presented, combining live action and archival footage seamlessly woven into a compelling whole. A few drawbacks include the somewhat random identification of the numerous interviewees and the difficulty of understanding why some archival clips appear when they do.

Many young and middle-aged adults in America today have no memory of the story told here, making this an important addition to World War II’s visual record. The cruelty of Japanese soldiers toward all Allied captives, including Americans, has created a kind of barrier to people in the U.S. making apologies for the treatment of this persecuted minority. But the fact remains that two wrongs don’t make a right. This film not only helps set the record straight, but should ease some of the pain of today’s Japanese-Americans who can’t forget this unfortunate history.