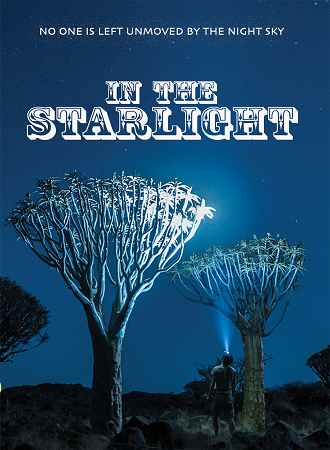 “It’s always an adventure with Paul.” So begins the 2019 documentary In the Starlight detailing the work of the award-winning Canadian mountain landscape and adventure photographer Paul Zizka. This meditative and poetic film follows Zizka through a series of photographic expeditions, traveling from the extreme wilderness of the Canadian Rockies to the profound emptiness of the Skeleton Coast desert in Namibia Africa. By the time we land in southern Greenland with Zizka, we are ready to join him in traversing the unforgiving glacier in pursuit of the Northern Lights. He is a subject as fascinating as the natural world that he documents. In addition to the time we spend with him on the trail, we are also treated to time spent with his young daughter and wife, fellow adventurers. The film shines during these interactions as we learn how his family keeps him grounded and in touch with his own humanity. For when he is on the expeditions it is clear that his humanity takes a backseat to the pursuit of excellence in his photography. The film notes that Zizka places himself in his photography to remind us of his own vulnerability in extreme landscapes and, indeed, the contrast in scale between man and nature that is provided by his presence is stunning. The cinematography in this film is striking and melds well with Zizka’s work. The narration and musical selections capture the serene and contemplative tone of the film. At times, the combination of music, cinematography and words will take your breath away, as if you are on an expedition of your own.

This excellent 52-minute documentary film is directed by Mathieu Le Ray, a French director and cinematographer whose work has ranged from wildlife documentaries to portrait films. This film received numerous accolades at film festivals, particularly in the category of adventure films. In the Starlight is highly recommended for general audiences interested in adventure cinema and photography. It would be a strong addition to a public library collection. The film is also recommended for academic libraries supporting programs in art and media studies and environmental studies. A series of iconic images from the film may be found on the film’s official website.