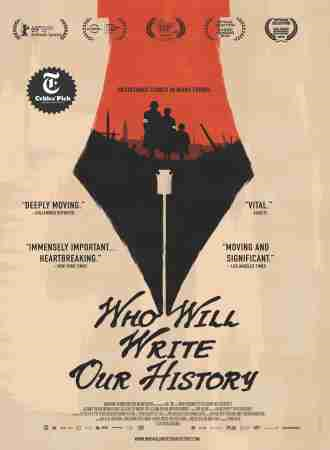 Who Will Write Our History 2018

The short answer to the title’s question is the people who were there: the Jewish victims of the Warsaw Ghetto who suffered and died when the Nazis occupied Poland during World War II. Who Will Write Our History accomplishes this mammoth task with all the breadth, detail, and intense emotion that they merit. Viewers see what occurred between 1939-40, after the Nazis invaded Poland, to the Warsaw Ghetto’s tragic destruction in 1944-45, and the ruins that remained when the Russians liberated Warsaw.

Who Will Write Our History, both a book by Samuel Kassow and this documentary film, is based on the contents of the Oyneg Shabes Archive—a project conceived by historian Emanuel Ringelblum, who recognized the need to document what was happening to Warsaw’s Jews. It is a magnificent international effort, thanks to the few dedicated Jewish survivors who knew about the Archive—the Nazis murdered more than 3,000,000 Polish Jews, including Dr. Ringelblum and nearly all the Archive staff—and undertook the difficult task of finding it under Warsaw’s rubble years later; and to the film’s many talented participants and generous sponsors in the US and Poland. Lengthy post-film credits attest to the many people, foundations, and other organizations that helped make the film a reality.

One Sabbath evening after the Nazi takeover, Dr. Ringelblum, whose home was in the Ghetto, called together a group of associates, and proposed they form an organization to collect eyewitness evidence documenting what was happening around them—ugly humiliations perpetrated on Jews, increasing restrictions to which Jews were subjected, isolation into a locked Ghetto and crowding into it of Jews from surrounding areas, forced labor, selection and removal of thousands daily to death camps, growing horrors of starvation, sickness, and filth, and the death of countless victims whose bodies lay in the streets everywhere in the Ghetto—men, women, and children—and whose bodies were treated like garbage. Though ostensibly working as a self-help organization, Ringelblum’s group secretly established the Oyneg Shabes Archive.

Through the Archive, Ringelblum and his organization saved, boxed, and buried countless diaries, newspapers, letters, other documents, photographs, and mementos. When the war was ending and the Germans were about to destroy the Ghetto and all its remaining Jews, the film’s principal narrator, Rachela Auerbach, a writer and Archive staff member, and two other Archive members who didn’t look Jewish were secretly relocated to the Aryan part of Warsaw. They survived. Years later, they worked tirelessly to find the Archive, retrieve the carefully hidden boxes, and open their contents to the world. Thanks to their work and that of the outstanding cast members and production teams who made this documentary film, we can see the tragic history written by the Jews of the Warsaw Ghetto.