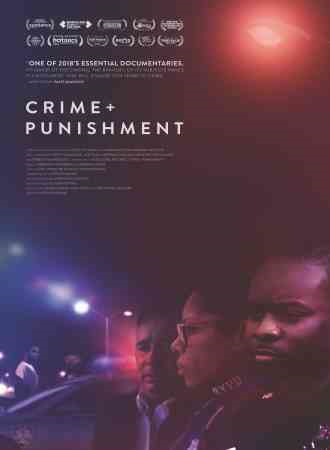 Crime + Punishment is a poignant documentary that takes on the New York City Police Department (NYPD) and challenges a system that disproportionally targets black and Latino communities. Director Stephen Maing embeds himself into the personal lives of the officers, a private investigator, and several families in the Bronx and Brooklyn areas of New York City who risked their livelihoods in the name of justice. As a silent witness to these events, Maing creates a compelling film centered on the group known as the NYPD 12, who filed a class action lawsuit (settled in 2017) against the police after facing retaliation for refusing to meet arrest quotas.

Spanning several years from 2014 to 2017, Crime + Punishment provides a critical look at how NYPD officers in minority communities are encouraged to “jump to the arrest” in order meet quotas that have been illegal since 2010. Several black and Latino officers who attempt push back against this model face retaliation, including reassignment of their duties, slander, negative performance reviews, and withholding of promotion. One of the sharpest examples of this is Officer Edwin Raymond, who is continually passed over for promotion, despite receiving high marks on his sergeant exam. It is, as Edwin Raymond states, a “David versus Goliath” fight for all those who have spoken out, especially with the lawsuit looming over each of their careers and family lives. The film does an excellent job of highlighting the proof supporting officers’ claims. Several of the NYPD 12 are recorded receiving unwarranted reprimands and even mocking speeches from their superiors while on the job. This, combined with personal documentation from officers tracking the retaliatory actions, gives the additional evidence that one would expect of such a documentary.

Not only do officers face discrimination under these quotas, but the communities themselves are targeted by the NYPD, resulting in a five times greater arrest rate of minorities over whites. Although charges are often dropped, young minorities are still exposed to rough handling, lengthy summonses, and jail time. Most prominent of these stories is Pedro Hernandez, a 17-year-old arrested and sent to Rikers Island for attempted murder. Ex-NYPD and private investigator Manuel Gomez works with Hernandez’s mother to clear Hernandez of these charges, providing a personal illustration of how being targeted affects urban youths and their entire family. Throughout the documentary, Gomez helps not only the Hernandez family, but other community members in reporting unethical officer behavior and exposing falsified arrests.

There are several public statements from the NYPD shown throughout the film, although they are never interviewed directly. Whether this a purposeful omission or because no one was willing to speak with Maing is not clear.

Given the several year timeframe and multi-story structure, the 2-hour length feels just right. With several intertwining stories and rough footage, it would be easy for the viewer to get lost, but the film does an excellent job of keeping the viewer on track with the use of text labels and transitions. Other than a brief opening, there is no narration by Maing, which allows the voices of the officers and families to remain prominent throughout the film. The use of hidden mics and interactions seen from hidden cameras captures raw, rarely seen moments between officers and their superiors. Viewers should recognize the divisive nature of the topic but also the potential for education and discussion. It is not surprising that this film has won numerous awards, including an Emmy for Outstanding Social Issue Documentary. Crime + Punishment is a powerful documentary that takes the viewer from an intimate cafe conversation to a Rikers’ cells. It is highly recommended for study in Criminal Justice, Sociology, and Urban Studies.