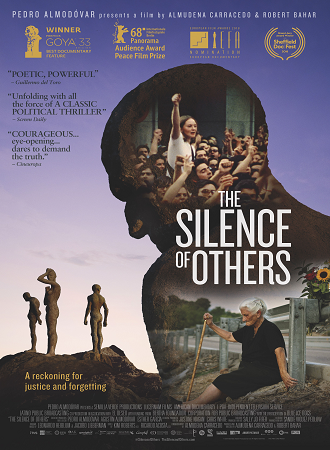 The Silence of Others: A Reckoning for Justice and Forgetting 2018

The Silence of Others is an engaging documentary about historical memory, the price of state-imposed silence, and an ongoing legal battle for justice for the victims of the Franco regime. It is chronologically organized around a court case under the auspices of universal jurisdiction investigating the perpetrators of war crimes, a case that is at odds with the official state policy of amnestia, amnesty for both the political prisoners of the regime and for its officials. The film weaves its narrative between the progress of the court case and the personal stories of several plaintiffs, and it is these cases and the emotion behind them that lend the documentary its power. The Silence of Others serves both as an indictment of those who committed atrocities during that time period and as a call to action to continue supporting the legal case.

The defining leitmotif of the film is a monument to the victims of Franco that consists of several human statues standing on a ridge gazing out into the surrounding countryside. The monuments are filmed at various times and angles to underscore different themes, appearing sorrowful, powerless, vulnerable, triumphant, or judgmental at different moments. They provide a powerful emotional touchstone for the film. The documentary has very little background music, with environmental sounds of traffic and the like being the main accompaniment to most scenes and interviews. This has the effect of highlighting the contrast between the normalcy of the modern environment and the personal pain of the victims as they tell their stories and point to the homes of their victimizers. It is a very effective way to highlight how the silence is baked into the fabric of everyday life in Spain.

The documentary makes judicious use of flashbacks and historical footage, mostly to provide introductory information or to illustrate personal tales. Its main focus, however, is on the present moment, and throughout the film most interviews and scene are current rather than retrospective. Transitions between sections are marked by a black screen with the number of years since the court case started and the number of plaintiffs, illustrating a slow snowball effect that effortlessly illustrates the difficulty in progressing the case. Hopefulness and optimism in one year are followed with sadness and pessimism in following ones as setbacks arise. The film thus feels very current at all times, without the sense of detachment often found in historical documentaries.

The Silence of Others has potential uses for a number of disciplines, including history/historical memory, anthropology, military studies, peace studies, psychology, sociology, Spanish classes, and civil rights/international law. Its major drawback for classroom use is that it is very much a continuous narrative, and the power of it lies in the slow progress from year to year. As assigned viewing or as something to be viewed in sections, it has the potential to be a very powerful frame for a class but is lacking in utility for use in a single lesson. Still, the sheer number of disciplinary connections give it a wide range of potential uses, and it provides an excellent window into a current issue of concern in Spain. This video is thus highly recommended for academic libraries, especially ones serving any programs that touch on Spanish history and language.