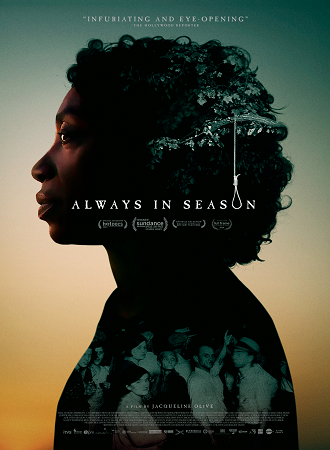 This engaging albeit tragic documentary delves into America’s ugly history of criminal lawlessness, and the uncivilized twisted psyche exhibited in lynching people of color. Propagandists who egregiously push a racist agenda in America portray African Americans, Hispanics, Native Americans, and Others as barbaric, beasts, and savages. Yet, who are the real savages who feel entitled to inflict inhumane acts of torture and violence against unarmed people of color? When does the harassment and terrorism against people of color that is “always in season” change to being non-existent? A community that allows criminal activities to nurture is no less guilty than the perpetrator.

Narrated by Danny Glover, this award-winning documentary exposes a mother’s journey to seek justice and closure for the lynching and murder of her 17-year-old son, Lennon Lee Lacy, in Blandenboro, North Carolina. Blandenboro is an agricultural, low-income, small community located approximately 90 miles south of Raleigh. Images of the confederate flag set the tone of the film that shows people are not only divided along red and blue states, but racial lines as well. Bladenboro is very much a microcosm of the divisions, both social and economic, between black and white communities. Evidence of this is present during a march for justice whereas many of the town’s white citizens stand idly by with looks of confusion as to the purpose of the march.

The town’s crowning glory is its “Beast of Blandenboro” festival. The festival is a controversial subject for its African American community as it perpetuates the “beast” as a black animal that menacingly prowls and kills livestock. In hindsight, the festival is analogous to the same type of propaganda used after the Civil War to depict free Africans of the diaspora as beasts lingering to ruin white society as seen in D.W. Griffith’s Birth of a Nation. Locals note that Blandenboro has a long-standing history of skeletal secrets that will always remain in the closet. However, the town cannot escape nationwide media attention when, on August 29, 2014, someone calls 911 to report a young man hanging grotesquely from a swing set at a local park.

While the African American community is grossly suspicious of the lynching, the majority of whites and law enforcement rule the lynching a suicide. Throughout the documentary, key pieces of evidence start to fall in place. Lennon is a 17-year-old African American male looking forward to a bright future away from Blandenboro. He is also in a relationship with a drug-addicted, 32-year-old white woman and mother of three. Red flags should be going off like fireworks, or is this type of relationship legal in some states? I digress.

Based on testimony from several close friends, the interracial relationship provides some impetus for racial retaliation. Especially noteworthy are Lacy’s white neighbors who are not only racist drug-dealers but on several occasions instigate fistfights among local children. Surprisingly, this drug-dealing family leave town within months after Lennon’s death. Especially suspect is the local paper/journalists who never question police account investigations and further suggest that anything other than Lennon’s suicide is a conspiracy theory. Meanwhile Lennon’s family, friends, the black medical examiner, and the black community as a whole rightfully suspect there is foul play. Unfortunately, as the rallying cry goes, “no justice…no peace.”

The film includes testimonies from family, friends, and professionals who provide a historical account of the atrocious acts of lynching in America, activities of Klansmen, corruption within law enforcement, and the insufferable psychological effects on the black family. Rarely, if ever, are criminals brought to justice, or convicted. However, the documentary is not without flaws. This reviewer is unsure if the films’ intent is to primarily shed light on Lennon Lee Lacy, or teach the history of lynching. I found the pacing of the film slow in some areas, along with more airtime devoted to actor reenactments of lynching across the south rather than an in-depth look into the life of the victim. Perhaps, the filmmakers could have focused on one continuous story line instead of skipping between several stories.

Overall, Always in Season does just enough to draw the viewer in and keep them engaged. Between Danny Glover’s narration and the soundtrack, the overall tone of the film is very consistent. I would not recommend this for younger audiences due to the graphic images portrayed. Any showing of this in an academic setting should come with a trigger warning to prepare the viewers for the subject that reminds us all of our nation’s greatest sins.

I recommend this documentary to adults interested in, or studying American and African American History, Criminal Justice, Psychology, and Sociology.