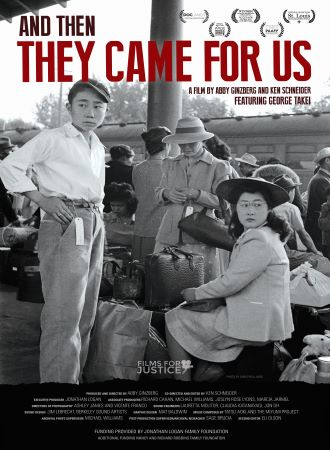 Through first-hand accounts (including that of actor and activist George Takei) and an incredible array of archival photographs, the documentary And They Came for Us delves into the human and political costs of the incarceration of Japanese American citizens during World War II. Taking its title from the Niemöller poem that indicted the cowardice of the German citizens in World War II, the film is framed by contemporary footage of a gathering of Japanese and Muslim Americans plus news footage from the 21st century. The filmmakers use graphic renditions of historical materials and news footage from that time to illustrate how internment camps were created. Interviews with subjects such as Gary Okihoro, Professor of Comparative Ethnic Studies at Yale University, accompanied by footage and posters of the period, contextualize the popular media representations that made it easier for the government to demonize American citizens of Japanese descent.

Government propaganda footage and racist photographs, juxtaposed with the images of those who were incarcerated and the realities they suffered, starkly complements the stories told by people in the film who were “relocated” and “interned” during World War II and also depicts the power of the media and the inherent dangers of circumnavigating U.S. Constitutional rights. Civil rights lawyer Dale Minami describes the case of Fred Korematsu who sued the U.S. government and lost his case in front of the Supreme Court. Fred’s daughter Karen Korematsu points out in the film that, despite her father’s conviction being overturned by the District Court of California, the case has yet to be reversed by the Supreme Court, leaving the case law somewhat intact.

Not only a valuable documentation of a disgraceful American policy, the film also provides a unique insight into the act of documentation via analysis of the works of government photographer Dorothea Lange and Ansel Adams through each of their photographs of incarcerated Japanese Americans. Questions are raised about what the government allowed to be presented in official images (no barbed wire fence, no sentry towers) and how the resulting images impact society at large as well as those depicted. Interview subject Bruce Tsurutani (photographed in a camp when he was three years old by Adams) describes his photo as the one remembrance he has of that time since those incarcerated were not permitted to have cameras. Adams’ assistant Mary Street Alinder and photo historian Richard Cahan point to Adams’ determination to humanize the Japanese in the camps yet Cahan also acknowledges the contemporary critique that Adams failed to show the true hardships of the people he photographed. The filmmakers then go beyond these iconic photographers to present the work of Toyo Miyatake, an incarcerated photographer who created a box camera and used contraband film to create photos, providing one of the most powerful images in the documentary (albeit just one of many compelling images in the film). The images themselves and the “how” and “why” of their creation provide an excellent starting off point for discussion and analysis of the importance of photography for documenting history and humanity.

And They Came for Us is an invaluable tool for teaching about the ethical and legal ramifications of incarcerating citizens without due process strictly based on race; the power of documentation and how images are taken and interpreted; and the history of Japanese Internment Camps in the United States. It also provides a foundation for the genesis of a larger discussion about the demonization of the other and importance of safe guarding civil rights now and in the future.