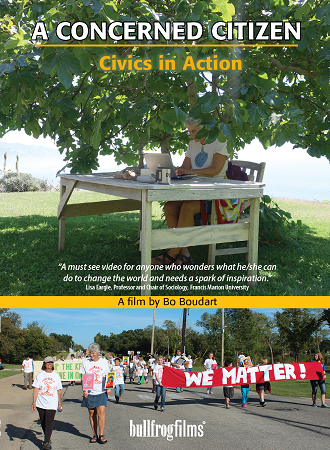 A Concerned Citizen: Civics in Action 2019

Reviewed by Irina Stanishevskaya, University of Alabama at Birmingham Libraries

The documentary focuses on the life and work of Riki Ott, Ph.D., a marine toxicologist, environmental activist, and educator. It starts with remarks by Riki Ott about the meaning of the word “community.” In her opinion, a community is “everyone and everywhere.” It can be a district in a city, a high school, or a university. And, according to Riki, activism is not about what officials (police, public health officials, etc.) can do regarding environmental disasters and human health effects, but what we can do as a community of concerned citizens to fix that.

Riki Ott does not recall when she became an environmentalist and activist, but her father, Fred Ott, was instrumental in inspiring and introducing her to the concept of a “concerned human being” when she was a child. Living in Wisconsin in the 1960s, he worried about overuse of the neurotoxin DDT. In collaboration with the Citizens Natural Resources Association, Fred brought awareness of DDT’s harmful environmental effects and potential human health impacts, which led to the ban of DDT in Wisconsin in 1969 and nationally in 1972. This was just one example of his actions as a concerned human being that ultimately inspired Riki Ott.

After graduating from the University of Washington with a PhD in Biology and Toxicology in 1985, Riki went to Alaska and worked as a fisherwoman on a commercial fishing boat. She described herself as becoming an “accidental activist,” after the 1989 Exxon Valdez oil spill into Prince William Sound, and impact on Cordova's commercial fishing community. The documentary explores how Riki, in collaboration with Cordova residents, organized a citizen-driven investigation into the negative effects of the spill on working and living conditions of the people in that area and how they worked together to restore normal lives in the community.

After the Exxon Valdez disaster, there was a number of other oil spills (including the 2010 BP Deepwater Horizon catastrophic explosion) in which Riki was involved as a marine toxicologist and an activist. Through many interviews with fishermen and other affected citizens who lost their businesses, health-related victims, local officials, and representatives from the numerous organizations (such as the Environmental Protection Agency, Indigenous Environmental Network, Vietnamese-American Fisherfolks Coalition), the audience will be introduced to the strategies that Riki and other activists have used to investigate the impact of the ecological damages on the health of the residents and their social and economic activities, and to help them fight for their rights and justice.

The documentary also highlights Riki’s motivations to educate children as future democratic activists and concerned human beings. She has created a curriculum for grades 6-12 called “Activating My Democracy,” which teaches children the basic concepts of democracy and civic skills - such as: fundamental human rights, respect, dignity, quality of life, and equity, and introduces them to the public trust doctrine. The main goal of this curriculum is to give children tools that help them recognize issues that affect their lives and to actively participate in fixing those issues. The audience may get additional information regarding the curriculum at Ultimate Civics

A Concerned Citizen: Civics in Action is appropriate for school, public, and academic library collections.