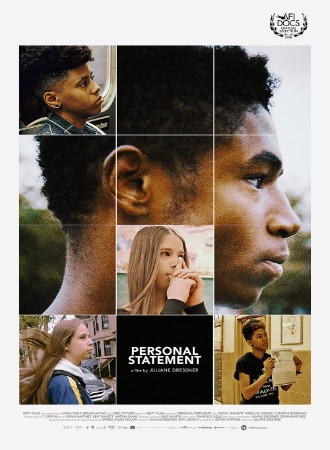 In the intimate, affecting documentary Personal Statement, three high school seniors become peer counselors at their various high schools, to encourage their fellow students to develop the drive and skills to get into college, while they themselves are working on their own college applications. Enoch, Karolina, and Christine each work in the student success center in their separate high schools, all of which are located in Brooklyn, N.Y. Supported by their own school counselors, they are in essence becoming mentors and social workers to their peers, a burden that sometimes hangs heavily on them, especially as they face their own struggles – institutional, familial, personal – to keep their own aspirations and college plans on track. The film admirably doesn’t try to preach or even intrude into their daily lives, but instead simply shows them progressing through the school year, making conscious decisions to try to help their peers, working on the personal statements for their own college applications, and trying to deal with the various obstacles in their way to finding, choosing, getting accepted to, and finding the money to go to college.

Each senior, though similar in age and socioeconomic background, is very different personally. Karolina is the bossy big sister to her peers, knowing that they will have to fight for their own educations and pushing them to do so. She’s driven and honest about her own struggles and theirs. Bullied in middle school because she’s a lesbian, she’s learned to be tenacious, persistent, and unafraid. Enoch is laid-back, quiet and highly observant. The tenderness and gentle persuasion he approaches his fellow students with is similar to the way he cares for his young niece. Christine is the most interesting of the three, with a friendly but wary demeanor covering a rock-solid belief in herself and firm commitments to her activism and her college goals. She’s the one constantly encouraging others to commit to their dreams. But her struggles center around her family, who don’t understand her activism, and her mother, who loves her but doesn’t see why she needs to go to college.

The filmmakers follow a Frederick Wiseman style of documenting their subjects: no narration, no interviews, and no exposition (beyond occasional titles introducing characters and their relationship to Enoch, Christine, or Karolina). This approach has pros and cons. The film can be scattered at times, and feels incomplete in its second half, with an almost immediate jump from sending applications in winter to spring acceptance letters. Opportunities to give more complete pictures of the primary students were missed. For example, though Karolina mentions her home life in passing, nothing of it is ever shown, and so there’s never any added definition to her personality than what she says about herself. When Enoch commits to SUNY-Cortland, it’s clear he’s of two minds in doing it, but the filmmakers’ process means that we never get to hear about his potential objections, or why he decided against them.

However, on the plus side, the realism of the film is front and center. Sometimes documentaries err in “making a movie” rather than showing people’s lives. Personal Statement never drifts in that direction, and the film is much stronger for it. Bag checks on entering school, truancy questions, hallway discussions, and classroom college prep sessions are mundane, yet vital to what will come next for these students. Tensions during family talks, such as when Christine’s cousin advocates on her behalf to her mom or when Enoch has to track down his unemployed mom to try to get a 1099 tax form out of her, are heightened because they’re so raw, and so crucial to the future. The story the filmmakers are telling really is the students’ own story, in their own words and actions. The viewer comes to feel deeply for these three students as they experience joys and sorrows around their pursuit of college. The camera, while never intrusive, also never shies away from uncomfortable conversations, tears, or happiness.

Though the documentary is too brief in places, and ends far too abruptly, it’s a captivating, intimate study of its subjects. I can understand the needle the filmmakers are trying to thread: wanting to offer a documentary which is digestible at less than an hour, and yet still contains enough content for a viewer to feel like they come to know Christine, Karolina, and Enoch, their personalities and their struggles. I came away from the film wanting at least another 30 minutes, or more, to spend with them. And that in itself seems to me the hallmark of a successful documentary film.