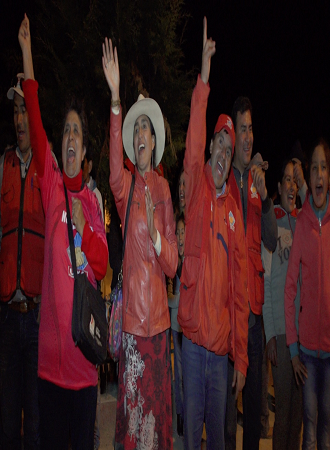 "It's a man's world, politics in Peru." Thus is the climate in which one woman hopes to make history as the first female mayor of her province. Return to the Andes follows Nelida Silva - folk dancer, entrepreneur, accountant and Peruvian advocate – as she leaves behind her life in New York City to run in her home province of Antonio Raimondi on a platform of sustainable development and anti-corruption. Silva proves repeatedly that she is a fierce candidate, a much-needed quality as she faces off against naysayers who believe a woman should not even be running for political office.

This documentary is an excellent example of a grassroots campaign in action as well as an eye-opening look the fight for women’s equal status. Silva travels through Antonio Raimondi to speak with urban and rural citizens of all ages and educate the community on the election ballot. During her travels, she promotes a modern, sustainable model that she believes would boost the economy and support the people in a way that the current mayor is not. It is unbelievable to her that families grow only enough food for themselves and women make clothing for their families but very few are making extra to sell. Her philosophy is that coins will not last; what will change the province are real projects. Even if she does not win the election, Silva vows to continue this effort to help families and the love of her region is obvious in every passionate speech and promise she makes to the people she meets.

Running for mayor in Peru, especially as a woman, can be difficult and outright dangerous. Throughout her campaign, Silva faces an endless stream of lies, rumors and attacks from political opponents that are eager to paint her as a stuck-up, modernized woman who uses child labor and washes after shaking hands with the people. Even more dangerous is combating the "Golondrinos" (people paid to transfer their home address from one district to another in order to vote for a candidate) and the mafia. Election results can change fast, rumors abound and organized crime in dominant in the area. By the time we reach election night, the viewer might feel just as anxious as Silva to hear news as results are posted and communicated through a series of phone calls.

This documentary is largely in Spanish, with English subtitles. Although the 48-minute film cannot cover the myriad of presented topics in great depth, it provides an excellent look into several key issues, including political corruption, women in politics, sustainable development and social justice. Return to the Andes comes recommended as a packed documentary with a beautiful homecoming story that would be a great component within a larger discussion.