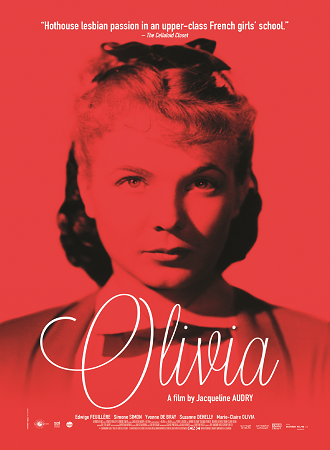 Nearly a quarter of a century before Chantel Akerman’s seminal work Jeanne Dielman, 23 quai du Commerce, 1080 Bruxelles (1975), Jacqueline Audry directed the French film Olivia (1950). A beautifully restored print is now available, allowing a 21st century audience to experience a French female auteur making movies before the onset of the French New Wave. As J. Hoberman writes in "The New York Times," the film portrays “an almost exclusively female world, as suffocating as it is liberating.” However, unlike Akerman’s portrayal of Jeanne Dielman’s suffocating mundane existence, Olivia is a feast for the eyes of costumes and scenery with windows into a seductive world of melodrama. Akerman gives us the reality of Jeanne Dielman’s experiences in painful detail whereas Audry, in the French cinematic tradition of Renoir or Cocteau, makes the painful world of manipulation beautiful to watch with camera movements that make the audience feel as though they are dancing with the characters on screen.

Set in a boarding school outside of Paris, Olivia follows the title character as she arrives at the school and becomes enamored with the head mistress, Miss Julie. Miss Julie and her lover Miss Cara both vie for the attention of the young women at the school and power plays abound in this tale of (somewhat) unrequited love. The film serves as an excellent example of the more dramatic (or overtly theatrical) stylized French films pre-New Wave with a uniquely female gaze that was otherwise non-existent at the time. Audry, a contemporary of Ida Lupino (the only female director in Hollywood during the 1950s after Dorothy Arzner completed her final film in 1943), examines the then taboo subject of lesbian love without overtly sexualizing the women on screen.

A film studies course viewing of Olivia alongside Agnes Varda’s La Pointe Courte would provide much to compare and contrast - narratively and stylistically. Varda’s film, considered one of the first films of the French New Wave, depicts the more conventional heterosexual relationship of a young couple falling out of love and was directed just a few short years after Audry’s film (1955). Olivia could also be seen in the context of literary adaption - a format Audry often tackled having made several films from novels and famously Jean-Paul Sarte’s play Huis Clos (No Exit). And of course, the restoration of the film itself also provides a basis for analysis well worth exploring.