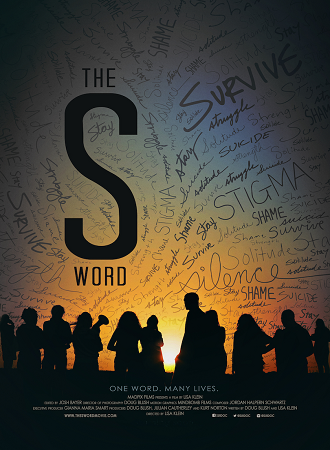 The psychology behind a person’s behaviors and actions is often a mystery. Everyone deals with pain, loss, stress, anxiety, and depression in their own way. To think that it can be explained with 100% accuracy is a fallacy due to the simple fact that everyone is an individual. The S Word tackles one of the most destructive feelings within the human brain: the desire to take one’s own life.

Mental health and suicide is classically something very difficult for people to talk openly about. However, in the United States where someone takes their own life every 12.3 minutes, a bright light of awareness has begun to shine. Director Lisa Klein takes the opportunity to add to the conversation with this 94 minute documentary that goes above and beyond to display the far reaching effects of suicide. By following a photographer’s mission to capture images and stories of survivors, the viewer is exposed to the harsh reality that a suicide attempt, successful or not, is never really “the end.”

When discussing the topic in itself, there is always the uniqueness of the reasons. One gentleman was sexually abused at a young age and could not make sense of it all. Despite his efforts, specifically with music being his cathartic release, suicidal thoughts crept in and were followed up with an attempt to take his life. Fortunately, the attempt was a failure and what followed was overwhelming support from his family. He is now a public speaker, father, and a published author. In another story, one woman describes the neglect while growing up with a schizophrenic mother who died at a young age. After her mother’s death she was placed in a group home. She was quickly deemed to be severely disabled and beyond help because of her own schizophrenic tendencies. After a failed suicide attempt and the proper treatment in response, she is now a mother and a staunch mental health advocate.

These are merely an example of the countless touching stories told. One survivor’s quote screams a profound message loud and clear: “We’ve got to start talking about this.” This film is one opportunity to stir the pot and continue that conversation.

The S Word is a healthy punch to the gut but one that everyone could benefit from. The film is an eye-opening piece that makes the viewer feel a million different emotions all at once. The way in which each story unfolds, it is difficult to not place yourself in each individual’s shoes. You will feel pain, anxiety, stress, and overwhelming sadness. You will begin to think about those around you have suffered and reasoned that suicide was the only option left. In that vein, it is incredibly difficult to hear that most survivors still carry a dark passenger with them – the belief that it will always be an option. They have just learned how to suppress the plaguing thoughts and emotions with help and support.

This film will be a strong addition to any academic library, especially one with a focus on mental health and psychology. In addition, the film would benefit a younger audience in high schools and the general population. Viewers should take into account some use of strong language and descriptions of sexual situations.