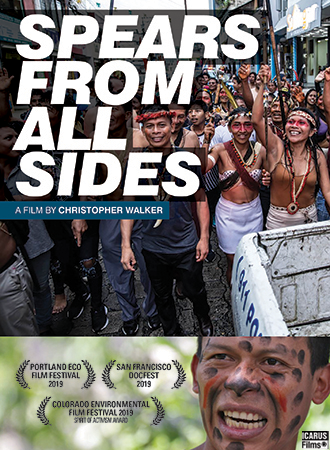 Since the first ever ‘gusher’ began pumping at British Petroleum’s (PB) Ancon 1 well site, in 1921, Ecuador’s fascination with oil was ignited. The oil sector in Ecuador accounts for about 50% of the country’s export earnings. Oil is king in Ecuador.

Spears from All Sides, explores the devastating price the Waorani tribe has paid to stop the devastation of their rainforest and country. In auctioning off much of its virgin rainforest to the international oil industry – including the Yasuni National Park, a designated UNESCO Biospehere Reserve (1989), this national and global treasure is thought to contain more species per acre than anywhere else on earth.

"At the end of 2014, filmmaker Christopher Walker returned to Ecuador to see if the Waorani tribe could still win their fight against big oil. He filmed over three years, up to the imminent auction of Waorani oil Block 22. This film follows the young, charismatic Waorani activist Opi as he tells the dramatic story of a passionate, community-based resistance by tribal communities in one of the most remote and beautiful areas of the world. The facts leave little doubt that the oil sector plays a prominent role in Ecuador’s politics and economic welfare revealing “the duplicity of the Ecuadoran government and the oil companies in their attempts to defeat the Waorani at all costs. Spear From All Sides, besides being a gripping story following action and events as they unfold, demonstrates the complex battles at the frontlines of climate change which we are rarely able to see on film.” -Film Synopsis