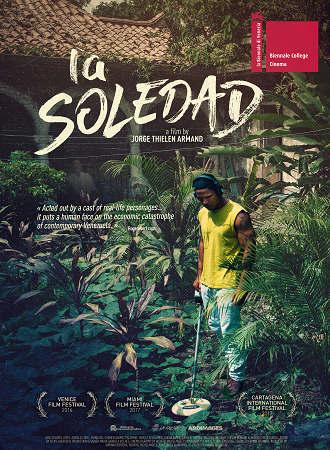 La Soledad, a semi-autobiographical film by Venezuelan director Jorge Thielen Armand, begins with a montage of scratchy home movies. An offscreen narrator (Thielen Armand) explains that they depict family gatherings at the mansion that the film is named after. The visits stopped years ago following the death of Thielen Armand’s great-grandmother, but her cook Rosina stayed on as a caretaker along with her grandson El Negro. Cut to a scene of a grown-up El Negro (real name José Dolores López), who like most of the cast plays himself, riding his motorcycle through the streets of Caracas to the gates of La Soledad. Rosina still lives there, as do El Negro’s partner Marley and their daughter Adrializ, along with a dozen other friends and relatives that they have welcomed into the home that isn’t really theirs. Like Venezuela itself, which by 2016 was well into the throes of an economic crisis that continues to this day, it has fallen on hard times: plaster crumbles from the ceiling, the power goes out regularly, the hallways are filled with junk, and there is no hot water. It’s a roof over everyone’s head, though, and safely removed from the dangerous slums where one of them just witnessed a shooting and narrowly escaped being killed himself.

The film’s plot is set in motion when El Negro’s odd jobs partner Jorge (Thielen Armand’s father Jorge Thielen Hedderich) tells him that he overheard his family say they are going to demolish La Soledad so that they can sell the land it sits on. This might seem like an ideal jumping-off point for a Hollywood-style narrative documenting El Negro’s increasingly desperate attempts to provide shelter for his loved ones, and indeed, La Soledad does present him with possible ways out of his predicament, including emigration (Marley’s preferred solution, and the route his brother and Jorge ultimately take) and “express kidnapping”. El Negro is too devoted to his ailing grandmother to consider the former, though, and too good a person to even contemplate the latter. In the end, bartering a sculpture from the house for a metal detector that he uses to search for a legendary treasure on his property is the most extraordinary measure he’s willing to take. The rest of his time goes toward whatever honest work he can get and scouring Caracas for medicine to treat Rosina’s hypertension to no avail. The film’s most powerful moments are, consequently, its least dramatic ones: long lines and empty shelves at a grocery store, a crowded hospital waiting room, the stark contrast between the kitchen at the house Marley works in as a maid and the one she makes arepas in with her daughter.

On the other side of the ledger, some of the film’s symbolism, including an emaciated white horse, a ghost, and a cache of razorblades in the walls of La Soledad, register as puzzling in the moment and overwrought in retrospect, and the movie doesn’t so much end as peter out. This is, in a certain sense, precisely the point, though: part of the tragedy of a situation like the one that Venezuela finds itself in is that while a brighter future might await those who would flee their country or harm their fellow citizens, the law-abiding and selfless have no choice but to waste away into nothing. Thielen Armand and his crew deserve enormous credit for coaxing a lot out their non-professional cast, especially Dolores López (whose anguish is palpable) and real-life setting, and for shining a light on an aspect of economic collapse that doesn’t get a lot of attention in the news media, the slow and painful death of that which we call “ordinary.” La Soledad is especially promising for a debut feature and marks its director as one to watch.