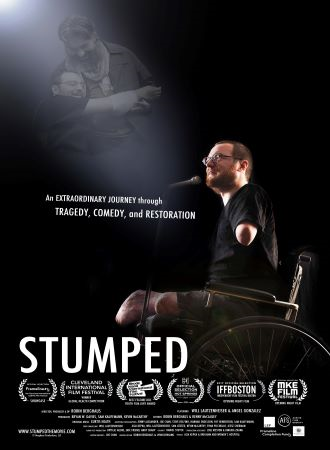 Stumped, distributed by GOOD DOCS is the story of Will Lautzenheiser, Will's partner Angel and Will's twin brother Tom. Will became an amputee due to an infection that started as a cramp and was ultimately identified as septic/toxic shock syndrome, Group A strep infection that caused damage, requiring limb loss - his lower arms and lower parts of his legs.

His parents participated in the film and talked about the upbringing of the twin boys, with Will, describing himself as more inwardly focused and decided at 8 he wanted to be a filmmaker. His brother Tom was more focused outward, - on nature. Will ultimately became a filmmaker and mines his unique experience as a disabled person to fuel his gigs as an amateur comedian. Will's partner Angel is a horticulturist and participates in Will's day to day care giving. Will participates in rehabilitation to relearn how to do everyday things like baking, dressing, travel, and showering. The strain or perhaps ambivalence seen in the relationship between Will and Angel is one of the more poignant aspects of the film. Will struggles with his dramatic decrease in independence while Angel comes across as resigned to helping Will with so many aspects of his life - dressing, cooking, transportation, and the roller coaster of emotions that come with such a shocking outcome from Will's surgery.

Will also has a weekly caregiver - Steve Delfino - who has become Will's comedy partner. Will, as a disabled person states that he is often seen as a tragedy or an inspiration, but his improv gigs normalizes things a bit. Sometimes Steve and Will do improv together, and as an introduction Will quips, "And this is Steve, the man who washes my scrotum twice a week."

Because of his arm amputation, his walking using prosthetics is extra challenging and frustrating for standing balance and locomotion. As he makes his way forward using wry, gallows humor, his romantic relationship is somewhat strained by his limitations and frustrations regarding his compromised independence. He makes connections to others using humor and to minimize his comparative social isolation as a disabled person.

The turning point in the documentary is revealed to be Will's desire to seek a limb transplant to replace the forearms and hands that have been amputated. Other transplant patients have received more rare transplants, such as a face transplant. The idea that transplants of skins are not successful, but grafts onto patients of their own skin, or an organ from an identical twin is more successful. Will's brother Tom does not participate or donate to the transplant procedure, though is there for the surgery and support after the transplant.

Issues considered in Wills decision to be a transplant recipient include lifelong use of immunosuppression drugs required for transplant patients. Doctors on Will's team are discussing the ethics of this kind of transplant because outcomes such as cancer and chronic conditions like heart disease and diabetes can be an outcome as well. The doctors also make much of Will's sense of humor and reiterate how important Will's attitude and perseverance are to his health outcomes. After a 6 month wait, Will is matched with a donor.

The surgery images in the film can be graphic. At the same time, the outcome is incredible to see and the transplant and the concept of having hands that are Will’s and "his" - the donor's - at the same time is compelling. Will's recovery is intense to integrate the transplant and the assimilate the nerve growth and the brain connections. However, his recovery is ultimately successful, and he continues to perform and lecture to educate people about transplants and his experience with disability.