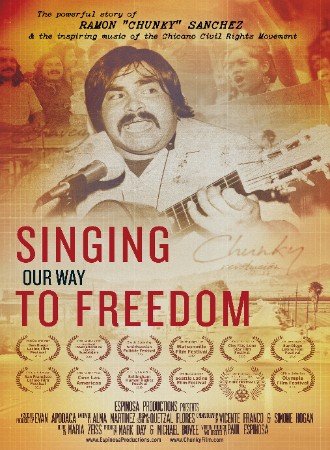 Singing Our Way to Freedom 2018

I must open this review with a confession: I am extremely particular in most things musical. So, Paul Espinosa’s Singing Our Way to Freedom grabbed me by the ears from the very beginning. It tells the compelling story of Ramon “Chunky” Sanchez and is filled with his music. Ranchero is a simple, joyous genre with infectious rhythms and melodies accompanying engaging tales. Were I to be tasked with leading a protest movement, I’d turn to Sanchez over Pete Seger for music without question. The only thing “We Shall Overcome” has ever inspired me to do was cover my ears. How can you hope to capture people’s hearts and minds with such dirges?

Although the film begins with early 1950’s home movie footage of Chunky and his siblings playing happily, it also describes his struggle as a young Latino school kid resisting indoctrination into white American society, accompanied by the customary Anglicizing of his name to “Raymond”. But Chunky proved to be not so malleable, and he rose with the tide of the civil rights movements of the era until he eventually was to receive one of the country’s highest honors at the Library of Congress.

Musical from an early age, he was influenced by Louis Armstrong and Motown, playing trumpet and drums, learning vocal harmony from his mother and guitar from his uncles. His talent surely would have brought him a successful career in any case, but it was the social activism of the 1960’s and 1970’s that captured his soul and swept the charismatic young player on to greatness. Chunky became the favorite musician of Cesar Chavez, who shrewdly interspersed his music with the speeches at United Farm Workers rallies. From there, the farm boy from Blythe, California would go on to perform internationally for the rest of his career.

The film includes clips of many of Chunky’s protest corridoes, which very successfully carry their messages while remaining irresistibly catchy. My favorite tune though is his band’s rendition of “Sabor a Mi”, a gorgeous old bolero, (which has absolutely nothing political about it) played with loving perfection by a group of masters.

Espinosa’s story of Chunky Sanchez is possibly the most enjoyable documentary I’ve ever seen, as entertaining as it is inspiring, and I’d recommend it to anyone.

Singing Our Way to Freedom garnered many international film awards, including the 2018 Best Documentary at the San Diego Latino Film Festival, and the official selection of both the San Francisco and Seattle Latino Film Festivals, as well as 2019’s official selection of the Cine Las Americas and Festival Internacional de Cine en Guadalajara. It was given a special screening at that year’s Smithsonian Folklife Festival.