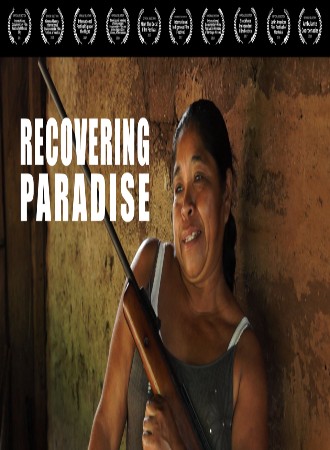 Recovering Paradise (Recuperando el paraíso) follows in the tradition of engaging cinema verité that gives the viewer a direct window into the life of its subjects without expositional details or apparent filmmaker interpretation. It is a documentary exploring the struggles of the Santa Maria Ostula Indigenous community in Mexico to reclaim their land from organized crime without assistance from the authorities. The interviews that do exist provide little in terms of context or clarification, nevertheless there are significant moments on screen where much is revealed in terms of the characters beyond their words.

Direct to camera archival interviews of Indigenous murdered and disappeared activists José Trinidad Cruz “Don Trino” and Francisco de Asís provide some of the most explicit explanation of what exactly the people are struggling to recover and the obstacles they must overcome, along with snippets of speeches captured by the filmmakers from various community events. Although the film lacks a certain amount of background for those interested in a deeper dive into the subject, it is definitely worth a course viewing as a supplement to other material on the challenges and triumphs of Indigenous Peoples as they fight for their right to return to and cultivate their land.

The film would also be an excellent resource for a documentary or journalism program delving into those filmmakers (or journalists) who embed themselves in communities in order to share stories, often putting themselves and their crew in dangerous situations. Recovering Paradise would be well paired with Barbara Kopple’s Harlan County, USA or the heavily produced Hollywood film Cartel Land directed by Matthew Heineman and produced by Kathryn Bigelow. All three films explore different subjects and are stylistically unique but contain material that give the viewer rare access to the lives of the subjects with moments where those operating the camera appear to be potentially in peril. Recovering Paradise is well shot and meticulously edited creating a nuanced and insightful film.