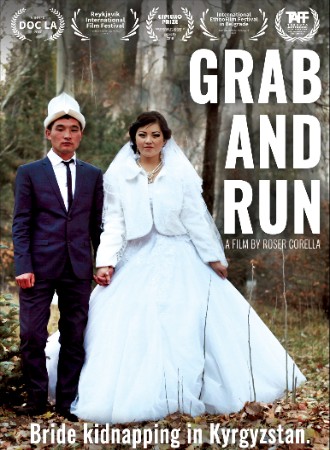 Ala-Kachuu translates into English as “grab and run,” and is also the title of Roser Corella’s documentary about bride kidnapping in Kyrgyzstan. Grab and Run intersperses interviews of men and women who have engaged in and been victims of the practice in one Kyrgyz village with scenes of daily life, local music (including songs about the custom) and impressive images of the surrounding countryside. Domestic scenes are punctuated with folk music and traditional ceremonies. Corella places the viewer in the midst of this town and embeds us in the experience of the locals and how they navigate Ala-Kachuu, both as a cultural concept and a reality of life. Arresting cinematography of the landscape and moments of domestic tranquility are depicted as we hear descriptions, often terrifying descriptions, of experiences calmly related by women through interviews. The film contextualizes this ritual through beautifully constructed images. A woman washing clothes in the foreground while another woman passes through a doorframe in the background, birds flying above a field and stark images of snow-capped mountains all appear carefully framed to engage the viewer without providing easy answers to this complex and disturbing tradition.

Much of the exposition of the film exists in the scenes of schoolteachers in conversation with their pupils. One teacher makes it clear that the practice is illegal, nevertheless one male student asks, “Wasn’t that law cancelled?” The film encompasses many different perspectives: victims, couples reminiscing about their experiences with Ala-Kachuu, young men planning a kidnapping, and young women at a bus-stop discussing the inevitability of possible abduction. The last scene, footage of an actual kidnapping in progress, provides a bleak manifestation of what many of the women describe throughout the film. Only through supplementary online research did I learn that the video was provided to the filmmaker by a third party, and she subsequently sought out and interviewed the bride and groom involved. The young woman initially jokes with her husband but finally confronts him by saying, “It’s better when you have a traditional marriage, instead of being kidnapped.” Frustrated by her husband’s justifications she charges, “I thought we were never going to talk about that day.” Defensively he says, “They brought this discussion up, and that’s it.”

Grab and Run, a remarkably constructed and perceptive film, can be used as a springboard for discussion of many topics and provides insight to not only Ala-Kachuu as it is practiced in contemporary Kyrgyzstan but to gender dynamics in general and the conflicts that can arise as a result of practicing antiquated traditions in contemporary society.