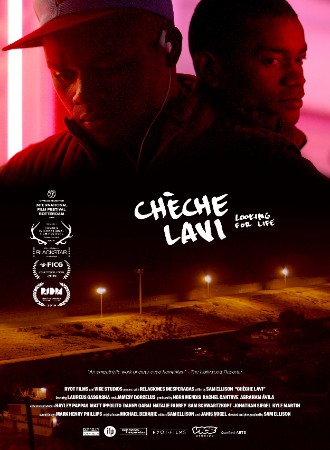 Gentle lyrics about setbacks are sung by twenty-seven year old Laureus (“Robens”) Gasgasha, one of the young men we meet in Cheche Lavi (“Looking for Life”), as he walks near the seaside after his late night job as a dishwasher in Tijuana, Mexico. Returning to his speaking voice, and with a gaze fixed upon the sea, he says, “What a life, Shit man!” Evocative of an on the road experience with some overtones one might compare to Beckett’s Waiting for Godot, we follow friends Robens and James as they seek opportunity in the United States after displacement from Haiti due to the devastating 2010 earthquake striking that nation. Upon meeting one another in Brazil following the emergency in Haiti and migration toward economic promise inherent in a country playing host to the FIFA World Cup championships and the summer Olympics, these fruits of opportunity go sour with onset of multiple scandals in Brazil, economic decline and a major public health threat from the Zika virus.

The majority of Cheche Lavi has us accompany Robens and James during the transitional time while they are in Tijuana and await outcomes for their petitions for asylum in the United States. Robens, the sometimes sullen and often poetic young man who admires American athletes, exchanges friendly jabs with the more wise-talking James, who carries himself with a bit more formal demeanor. James is less interested in professional sports. He enjoys challenging Robens as to whether the athlete obsessed young man can actually name the players on the Orlando Magic basketball team. James possesses a wider network of direct family support than Robens, even if he is quite cut off from it. Belying Robens slightly more casual demeanor in comparison to James, there are hints we see suggesting Robens may possess the stronger work ethic.

Within a film showing tensions and aspirations to opportunity associated with globalized culture and commerce, we observe how those commodities readily cross borders, including our cellular phones and signals, while the barrier for human crossing is more perilous. We glimpse an earnest roadside vendor hawking editions of El Mexicano newspaper to passing vehicles, dressed in a Walmart-like work vest emblazoned with that newspaper’s name. He wears a clown nose and Day-Glo wig, while surrounding his shopping cart with representations of U.S. entertainment culture, presumably also for sale. That includes SpongeBob SquarePants toys, and another toy perhaps the ideal American cinematic representation of travel, the fear of others and being marooned, a figurine of E.T. The Extra-Terrestrial.

We witness the different paths the two men traverse after their separation, just as the presidential administration in Washington DC changes in early 2017 and brings sharp revision to U.S. asylum policy. With James, contrasts are vivid between the earnestness of the man we have gotten to know and the extensive mistreatment in America he subsequently describes. Robens bittersweet situation shows us some seeming progress from jobs in Tijuana dishwashing to a manufacturing job, surrounded by good natured co-workers. He still compares his situation to a leaf dropped into a running river. There is much creative energy expressed by Robens, but will it find ground in which to flower? We journey somewhat deeper into his inner life than we do for James.

Cheche Lavi offers a strong visual sense of place and male friendship, a glimpse of humanity lived on the margins, adjacent to both physical and political-psychological borderlines. It is beautifully photographed. Not limited to Robens taking an I do not care themed selfie in front of an imposing southern U.S. border wall under construction, visual metaphors for global opportunity, competition and precarity reside even in some smaller images we see of games played with marbles and dominoes. Cheche Lavi should be of interest to many in sociology, migration studies, Latin American and Caribbean Studies. Some in gender studies may also find it compelling for its portrait of bonding between two men in their mid to late twenties. As a winner of a New York Cinematography Awards Best First Time Director Award, Sam Ellison prior to helming direction of this film is also known for camera work on feature films like the Kenneth Lonergan directed, Manchester by the Sea, and Marielle Heller’s exploration of children’s television personality Fred Rogers, starring Tom Hanks, A Beautiful Day in the Neighborhood.