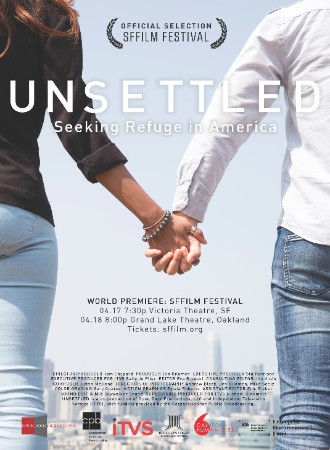 It is a dangerous time to be gay, lesbian, or transsexual in the world. Seventy countries have made it a crime to be of such orientation and in four of those countries it is punishable by death. Facing the very real possibility of physical violence, torture, or death many young men and women flee to the U.S. in hopes of gaining asylum. Even if they make it there is a seventy percent chance Homeland Security will deny their claim, the number of claims granted at an all-time low since 2016.

Often arriving alone, traumatized and rejected by their families, and with very little money, the young men and women featured in this film have an uphill battle but they do have help from a dedicated group of volunteers in the U.S. who help them find shelter, employment and attorneys willing to take on their cases in the San Francisco area. They are also fluent in English. Junior, who fled from the Congo, is HIV positive, is lost soul and looking for someone to take care of him until he begins to realize, after having moved around multiple times in a span of less than a year, that the only one who can look out for him is himself. Coming out in the U.S. is still dangerous for refugees but Subhi Nahas, who fled Syria, became a LGBT activist and would later be reunited with his sister in Canada. Cheyenne and Mari came from Angola and relied on a GoFundMe campaign to scrape enough money for living experiences while they waited months for an attorney to take on their case. Their stories are personal and deeply poignant and fortunately have a happy ending but one is left to ponder all the stories that do not.