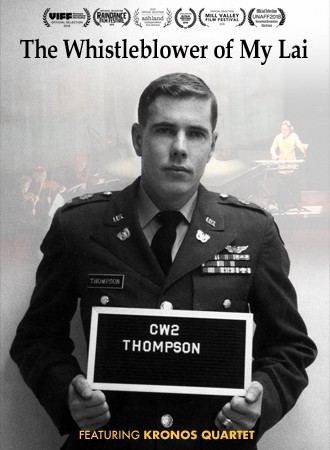 The Whistleblower of My Lai 2018

The Whistleblower of My Lai opens with Kronos Quartet and Vietnamese musician Vân-Ánh Võ performing a piece from the opera of the same name before quickly segueing into a few brief clips of the Vietnam War in the sixties and interviews with composer Jonathan Berger and David Harrington of Kronos Quartet. Their opera tells the story of Hugh Thompson, a 24-year-old officer in Vietnam, who attempted to intervene in the massacre of My Lai on March 16, 1968 and then brought the calamity to the attention of the American public. The film begins mostly as a basic behind-the-scenes or making-of piece about the creation of the theatrical work and later begins to interweave the story of My Lai and Thompson with incredibly powerful archival footage and anecdotes told by the opera’s librettist, Harriet Scott Chessman, and other members of the opera. A particularly poignant story told by Chessman recounts soldiers sitting down for a lunch break after having killed several children in the morning. She describes Vietnamese toddlers walking up to these same soldiers and offering to share their lunch as we hear music from the opera and watch archival footage of soldiers and Vietnamese children from the war.

The film vacillates between the story of Thompson and the story of the opera and represents interesting aspects of both but does not quite succeed in fully fleshing out either element. The opening segments focus too much on the narration of Jonathan Berger, giving short shrift to other participants and adding to the “making-of” feel of what otherwise has the potential to be a much more nuanced documentary. Kronos Quartet and Vietnamese musician Vân-Ánh Võ provide examples of that potential, as Võ reveals her father’s involvement in the war and her experimentation with instruments. Unfortunately, the documentary only scratches the surface in terms of her process and that of Kronos Quartet. Librettist Chessman provides historical context as well as insight concerning the process of her libretto creation which would be of interest to those looking to bring historical characters to life through art. Sections of the film where the opera itself is intercut with archival footage - allowing the viewer to contemplate the impact of My Lai and the power of music and performance to examine history - are powerful. Unfortunately, despite some incredible moments it fails to go beyond the making of this particular opera to a deeper analysis of the process itself. In a very specific context of a course exploring approaches to creating works from historical events The Whistleblower of My Lai could be an asset - or in the study of artistic representations of the Vietnam War.