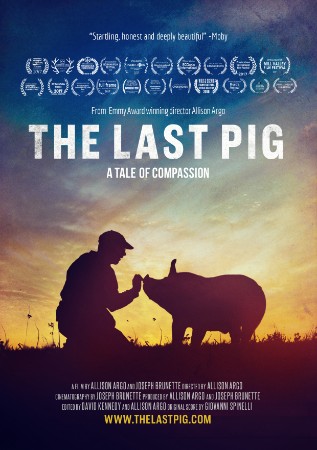 The film is set amidst the beautiful rural landscapes of Upstate New York where a pig farmer contemplates his experience and a moral predicament: he cannot stand any more sending his pigs to the slaughterhouse and therefore has decided to refocus his business on growing veggies. Such a short and simple storyline has many advantages. The message is clear and likely would resonate with many students of the younger generations that tend to value high sustainability, environment, and animal rights.

The fact that the film is available in four different versions (from the Elementary School to the University level) of different length and accompanied by film companion guides is exemplary: all educational videos should follow this model.

Cinematography (by Joseph Brunette) is unpretentious and certainly poetic with its focus on pigs’ eyes and low angle shots to imitate the pigs' point of view and perspective. The farmer’s intimate first-voice narration and evocative music allow the viewer to notice nuances and adsorb emotions: the film is a nostalgic farewell to the farm and its inhabitants, the pigs. Dog seems to be the only other member of the farmer's immediate social milieu. Instead, the farmer has built emotional attachment to his pigs and their sociality (e.g., one of his insights is that there is rarely a pig that sleeps by itself, not touching others).

These and other advantages of the film could be assessed also as its shortcomings. The message of the film is arguably too simplistic and biased; no other viewpoints or alternatives are provided. Even if he grew up in a big city, the farmer does not exhibit interest in humans and social life. Most statements about the pigs are narrated rather than visualized, leaving the viewer with a sense that this film is not about the pigs – rather about an idealistic mid-age American with an exceptionally narrow worldview. For instance, he claims that humans stopped eating horses and dogs – that is not the case among all populations, especially those that do not eat pork and therefore do not have the ethical dilemmas related to taking pigs to the slaughterhouse.