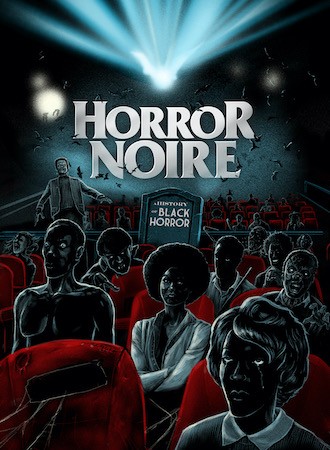 There are films that go beyond the confines of their specific genre to tell a greater story - such is the case with the documentary Horror Noire: A History of Black Horror. As a film created under the umbrella of streaming service Shudder (run by AMC Networks), there is an expectation that it will be entertaining and fulfill the desires of a horror fanatic - but this documentary is also based on the book by Robin R. Means Coleman, PhD, so it has scholastic integrity going well beyond its simple entertainment value. More than a movie on movie-making or a film about horror films, it delves into film history, film application, film studies and ultimately American history. Director Xavier Burgin combines interviews, conversations between filmmakers and actors, film clips, archival footage and a series of impressive and informative graphics for an in-depth analysis of the horror genre as it applies to the Black community. The score effectively drives the film in a similar fashion to the way score can create suspense and tension in horror films. Hollywood icons including Ernest Dickerson, Loretta Devine, Ken Foree, Keith David and Jordan Peele speak to their experiences working in the horror genre and also reflect on how they have been influenced by the work of their predecessors. Editors Scott Strobel and Horatiu Lemnei cleverly utilize film clips to emphasize the discourse of the interviews and filmmaker’s conversations - sometimes finishing the sentences of their subjects with dialogue from the films themselves. Issues of race are tackled in cinematic terms by interspersing the analysis of the films with news clippings and archival photographs of contemporaneous events. Through this juxtaposition it becomes clear how entertainment and art are in constant conversation with the events and circumstances of the time in which they are made. With this comparison the film considers how the Black experience, at any given time in history, in and of itself is often inherently part of the horror narrative that is then reflected on screen. As producer and UCLA professor Tananarive Due remarks, “Black history is Black Horror.”

In some instances, Horror Noire redefines what “horror” is in film. In tackling early films, Robin R. Means Coleman, Tananarive Due and others deconstruct D.W. Griffith’s canonical film Birth of a Nation. Griffith’s film is an indelible part of any early film history course in the United States and is often simply addressed in terms of technical mastery and its racist storytelling. This documentary provides an additional take, exploring not only the historical impact but also how the character of Gus informed horror movies both at the time and for future generations - and how the film itself, experienced by a Black audience, is definitively a horror film. In a different context, they tackle Kasi Lemmons’

Eve’s Bayou, traditionally classified as a drama, director Burgin through his subjects explores the horror elements of the film, expanding on the understanding of genre classification.

Horror Noire is all-encompassing in tackling film history, from the early films of Oscar Micheaux and the lesser known directorial work of Spencer Williams to the horror films of the fifties and sixties, Blaxpoitation films of the seventies, eventually leading to the renaissance in Black Horror in the 21st century - what Burgin argues could be considered the pinnacle of Black Horror, Jordan Peele’s Get Out. The documentary begins and ends with clips from the Academy Award winning movie, and yet Get Out in no way eclipses the analysis of all of the other films represented, including, to name a few, Night of the Living Dead, Blacula, Tales from the Hood, and Ganja & Hess. In addition to dissecting these individual films, there is an evaluation of the evolution of Black representation on film throughout history, providing a holistic as well as detailed examination of the subject.

Horror Noire: A History of Black Horror would be an asset for cinema departments for film history, film theory, film studies courses and for film production classes since it tackles the making of movies from story to casting to on-set challenges. Writer and producer Ashlee Blackwell also has a blog, Graveyard Shift Sisters, which provides additional resources for teachers in the horror film arena. Beyond specifically employing the documentary in the study and practice of film, it would be an engaging way to spark discussions about American history for various other departments and schools. It includes elements of other quality survey films on filmmaking such as Fog City Mavericks (directed by Gary Leva, interviewing San Francisco filmmakers) and Half the Picture (directed by Amy Adrion, interviewing female filmmakers) with a comprehensive investigation of how film engages with culture on a larger scale. Highly Recommended.