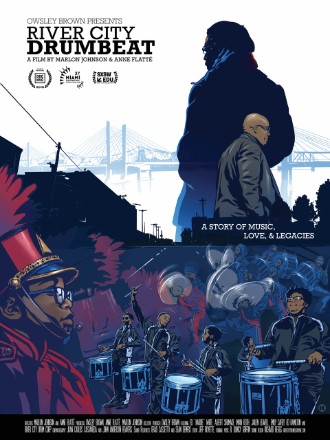 Wow! Filmmakers Marlon Johnson and Anne Flatte’s feature-length documentary is awe-inspiring and informative, yet, at times, can also lack direction. At the heart of the film is Edward “Nardie” White, an artist and director of the local Boys and Girls Club in Louisville, Kentucky. His dedicated leadership inspires under-privilege children to believe in more than just sports. He encourages young adults to believe in themselves and to learn life skills through their participation in the River City Drum Corp (RCDC). Mr. White interweaves African culture and history into daily drum lessons—leading to an impressive and talented drumline--to instill children with a sense of pride and self. With assistance from numerous adult and student leaders, such as Albert Shumake, Imani V. Keith, and Jailen Leavell, the RCDC is a well-established professional drumming Corp able to compete at local, state, and national levels.

As stated on the River City Drum Corp website, their vision is to “provide a structured environment and support system to stimulate youth as community leaders and create a community where live music is enhanced and strengthen through the ‘Spirit of the Drum’.” The community is none other than Louisville, Kentucky, home of legends Muhammad Ali (celebrated activist and boxer), and Colonel Sanders (creator, Kentucky Fried Chicken). A once thriving African American community, many neighborhoods are spiraling in economic decline. Helplessness and hopelessness often lead to drug and gang violence among young adults. Mr. White provides an opportunity and space for young adults to succeed academically as well as learn the necessary life skills to survive on the mean streets. At his core, he is an educator, leader, mentor, and father figure to school-age children living in both single and double-parent homes.

The young adults in the film should also receive kudos for their dedication and commitment to the craft. Those who have an interest to join RCDC must first construct their own pipe drum using recycled materials, as well as maintain a 2.5 GPA. Mr. White wholeheartedly believes that this act gives children a sense of self-esteem, and self-worth that is not forthcoming from negligent parents nor mainstream society. Strong takeaway themes in this film is the ability to believe in others, care, commit, dedicate, and survive all obstacles. This film serves to highlight a community of activists whose mission it is to uplift communities of abandoned African American and low-income children who lives have meaning. Community leaders, such as Mr. White and others, remind children that both Black art, and Black lives matters.

This viewer could go on and on with accolades commending everyone involved with RCDC, and this project. However, it is not without its flaws. The film could have benefitted from identifying talking heads during monologues, as well as pointing out if RCDC performances were competitions or exhibitions. It would have been fantastic to see RCDC receive awards/trophies based on their merit, because they are that good. At times, I had to question the primary purpose of the film. The narrative pulls together piecemeal archival footage with no clear direction other than to highlight an awesome RCDC, and awesome they are. Still, with its flaws, this viewer highly recommends this film for all age groups interested in African American studies, Music, and building self-confidence. To learn more about the RCDC, I invite you to explore their website.