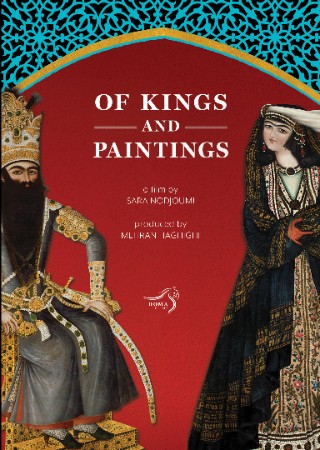 Of Kings and Paintings 2019

The Qajar Dynasty ruled Iran from 1785 to 1925. The rulers used art and architecture to showcase the country's importance. Caught between two empires--Russia to the north and British India to the east--Iran wanted to show it was a power in its own right and not just another fruit to be plucked by an empire. Of Kings and Paintings shows us the oftentimes stunning art created, the people who made it, and the royal patrons who supported it.

Fatah 'Ali Shah, who ruled Iran from 1797-1834 was the first of the Qajars to provide significant patronage to artists. The paintings created were a way to fill the walls of the many palaces being built.

We see examples of these brightly colored works in the video, including one monumental wall painting that took up three sides of a reception hall. It depicted the ruler on the Peacock Throne, his sons (although he had too many to fit all in the painting), the palace court, and foreign diplomats. This work was copied and reproduced more than any other work of the era, the video says.

Of Kings and Paintings then proceeds through the other rulers of the Dynasty, discussing the art they supported and the prominent artists of each era, in narration by the video's writer-director, Sara Nodjoumi. Historians and curators of Middle Eastern art offer commentary on the varying styles through the years, the portrayal of women in the paintings, and the difference between work meant for public display and that which was shown only in the private areas of the palaces.

A highlight of the second half of the Qajar Dynasty was the commissioning of a fully illustrated six-volume set of "One Thousand and One Nights" (known in the West as "The Arabian Nights"). An expert says in the video that the publication of this set was "one of the great achievements of the 19th century Muslim world."

Royal patronage declined as a "constitutional revolution" movement took hold, demanding more democratic institutions. In 1925, the Qajar Dynasty was overthrown. The new ruler auctioned off or destroyed royal art collections as a way to eliminate vestiges of Qajar rule.

For a while, Qajar art was disregarded. But now, as the video points out, artists are appropriating Qajar images for their own work, and exhibitions of the Qajar era are increasingly seen around the world.

This video is an excellent introduction to Qajar art. There are voluminous examples of work shown, both in full and in close-up detail. The commentary is informative, without being too technical or overly scholarly. The video is therefore recommended both to academic libraries and public libraries with a strong art collection or significant Iranian population.