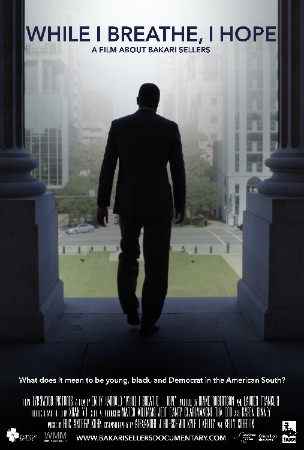 While I Breathe, I Hope, follows Bakari Sellers, South Carolina’s youngest-ever-elected African American State Representative, in his run for Lieutenant Governor. The documentary takes its name from the South Carolina state motto, Dum Spiro, Spero, a message at odds with the Confederate flag flying over the state capitol throughout Sellers’ campaign. The film is situated between two horrific, racist massacres. One, the Orangeburg Massacre, took place 20 years before Sellers’ birth, when 3 students were killed by South Carolina Highway Patrol while protesting a segregated bowling alley. Sellers’ father was among the 28 students wounded, shot in the shoulder, only to be arrested at the hospital. The other massacre, almost 50 years later in 2015, was in Charleston, when Sellers’ fellow fellow SC State House elected official and senior pastor at Mother Emanuel A.M.E., Clementa C. Pickney was one of 9 murdered by a white supremacist, who had proudly touted the Confederate flag on social media. Following the Charleston Massacre, community members, organizers and Sellers are galvanized to successfully remove the Confederate flag from the state capitol, thrusting Sellers into the national media spotlight, a position he continues to use to present day to advocate for racial justice and to support African American candidates.

From a technical perspective, the film is expertly crafted, weaving archival stills from the Orangeburg Massacre and Sellers’ family life, with excellent camera and audio work, documenting Sellers’ non-stop schedule. From fish fries to tours of underfunded schools, in compact cars, in the capitol building, and campaigning on the street, they even captured an ethnic slur yelled from a passing car, which Sellers himself didn’t quite hear in person. The result is that the viewer is immersed not only in the endless grind and emotionality of a state-wide campaign, but also witnesses the day to day bigotry and intimidation perpetrated against African American candidates in South Carolina.

The film is highly recommended for use in history, political science, civics and government, as well as ethnic studies and American studies courses. The flag removal portion in particular would prove a good addition for courses addressing monument removal. However, its greatest strength is as an engaging portrait of a politician and community organizer who, despite losses of life--stolen through racist violence--and losses in politics--at the hands of racist voters--persists to find success wherever he can, remaining true to his “duty to continue,” for Dum Spiro, Spero.