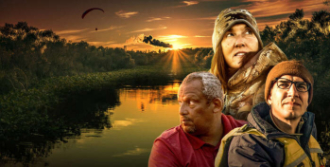 Last Call for the Bayou: 5 Stories from Louisiana’s Disappearing Delta 2019

This stunning film illustrates to the viewer what is at stake is our wetlands disappear. Louisiana’s wetlands comprise about 40% of the U.S.’s continental wetlands and include the largest contiguous wetland system in the lower 48 states. The state’s wetlands include swamps and marshes. Swamps are areas that hold water and have woody vegetation.

The viewer is introduced to 5 vignettes documenting the challenges facing the Louisiana wetlands. Albertine Kimble, duck hunter and current resident in a marshland at the mouth of the Mississippi River. Her home is forty feet above the marsh. The duck population is dying, not because of the hunting but saltwater intrusion and lower river water. As she points out in her commentary, “Many people think of wetlands as mosquito-infested, mucky, wet land that is of little value. The Louisiana coast is an economically vibrant and valuable area that serves many functions for the state and the entire country.”

The estimated value of coastal wetlands in the state is enormous. As the wetlands disappear, at a centimeter a year, we face very real threats to the environment, culture and economy of Louisiana and ultimately, our country. This will have serious consequences in four distinct areas: 1) Oil and natural gas production, 2) Transportation and navigation, 3) Commercial fishing, and 4) Recreational activities.

“The coastline is dying not because anyone wanted it to die/ but because of the unintended consequences of human engineering and/ technology". - Tom Tidwell, Bayou Farwell

In the second vignette, coastal geologist, Alex Kolker, indicates that Louisiana’s barrier islands and wetlands are dying at alarming rates and will seriously impact the natural gas and oil industry that is transported through Louisiana coastal wetlands. One fourth of the nation’s energy supply depends on the support facilities in south Louisiana. He further points out that as wetlands and barrier islands disappear, the wells, pipelines, ports and roads that make the energy industry possible will be more exposed to open water, wave action, storm surges and water traffic. This includes thousands of miles of pipeline that will be increasing vulnerable to rupture, resulting in oil spills and gas leaks. Over $103 billion in assets will be at risk and the transfer of petroleum products within the state and to the rest of the nation will be disrupted. The human factor in all of this would be catastrophic.

In the third vignette, photographer Ben Depp explores the Louisiana terrain from the air taking photos of the barrier islands which are losing soil at an enormous rate each year. Vignette four introduces the viewer to Gleason Alexis, commercial fisherman who fears that the shrimp fisherman’s livelihood will disappear due to the erosion of the sea-beds and lower sea levels surrounding the Louisiana bayou. Now it's ‘sink or swim’ in a faltering shrimp fishing business.

In the final vignette, the viewer is introduced to Kasha Clay and her family who are Native Americans of the United Houma tribe. She is a sociology student at Nicholls State University. Through a grant provided by the National Academy of Sciences, Kasha provides an historical picture via interviews and pictures from her relatives of the gradual erosion over time of the Louisiana bayous and surrounding waters.

A must-see film that illustrates the destructive nature climate change and man can inflict on our ‘protected marshlands.’