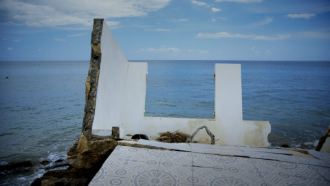 The documentary Landfall is a beautifully shot documentary depicting life in Puerto Rico in the two years between the destruction of Hurricane Maria in 2017 and when people took to the streets to remove Ricardo Rossello as Governor in 2019. In these two years, Puerto Rico was already in 72 million dollars in debt and the hurricane brought more financial struggles to the people of Puerto Rico which caused this political movement.

I recommend Landfall because of its amazing shots of life in Puerto Rico and the information that you get from all of the interviews. The only issue with this documentary is that there are no introductions of who people are which can make it difficult to follow. I also think a viewer would need to know more about Puerto Rico's history to fully understand the debt Puerto Rico was in and why the social movement seen at the end of the film is so important. There was minimal explanation as to why this was occurring and why there was a celebration after.