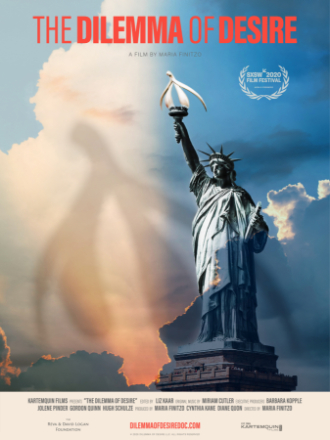 The Dilemma of Desire contains reference to many, many dilemmas surrounding women's bodies, from anatomy to autonomy, representation, empowerment and much in between. For use in higher education classrooms, there may be the need for front loading some of the more difficult topics such as rape, street harassment and statistics around sexual assault etc. While there are not graphic depictions of these acts, they are discussed and stylized art installations of acts of rape are briefly depicted.

The film was produced by Barbara Kopple, a highly respected documentary film maker. Because of the 2020 pandemic, this film has not received any awards because film festivals were not held. However, in 2021 that may change.

In this documentary there are surprising statistics stated throughout, for example 96% of men have an orgasm during sex, compared to 25% of women. The Dilemma of Desire opens in a Biology of Womanhood class taught by Professor Stacey B.B. Dutton. She realized through this class that she herself was unaware of the structure of the clitoris, and as a biologist, she found that unacceptable. After googling the structure, she discovered that it was a vast internal organ. Dr. Dutton states, "I was dumbfounded that all the anatomy that I had been taught, and that was taken for granted, excluded the truth of my anatomy. I just couldn't take it that the representations of sex and sexuality almost universally exclude the clitoris as being necessary. That's just absurd." She has subsequently decided to use this realization to fuel her life's work.

As part of Dr. Dutton's class and her work as a biologist, she invited artist Sophia Wallace’s to mount a show at the college. Wallace's installation is entitled Cliteracy, and her prints, and sculptures of the clitoris pull from contemporary culture, often referencing rap music lyrics, re-centering male genitalia and sexual conquest to center the clitoris. Her installations, a combination of 3D clitorises and a print series called the 100 Natural Laws that are sometimes exhibited as wallpaper and some as standalone slogans. She also engages in clitoral graffiti based on the 100 Natural Laws or just repetitions of the physical structure of the clitoris.

The film follows a few individual women, one a stripper and burlesque performer, one a Queer and sex positive teacher and activist, another a Muslim and another woman who is a materials designer, making women-centric vibrators that are neither a novelty nor shaped like a penis.

At over 100 minutes, the film is quite long and would likely exceed a class period but would be an excellent film to accompany a campus event like Vagina Monologues, PRIDE, or other body/sex positive programming on campus; or the Biology department, Women's and Gender Studies, or the medical school.