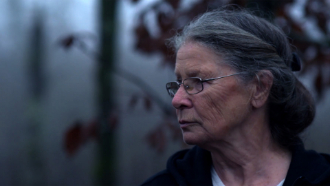 Morissa Maltz’s documentary film Ingrid begins as visual poetry with its beautifully captured moments of the natural world where its main character Ingrid Gibson has escaped to pursue her personal artistic endeavors in her twilight years surrounded by nature. Those exquisitely captured moments are sprinkled throughout the film. In addition to beautiful cinematography, the film explores character through the insights made to camera by Ingrid, the film’s namesake and main subject of the film, with verité footage from her creative work and life on the farm that highlights her solitary and yet fulfilled existence. The sparse yet solid score provides a perfect bed of sound for the images which almost provide a melody of their own.

The pacing of the film smoothly invites the audience into Ingrid’s world to examine concepts surrounding the purpose of existence and art. There are snippets of interviews which give a glimpse into Ingrid’s past, her career in fashion and as a woman raising children while trying to succeed in the work world, along with her possible accomplishments and regrets. Ingrid grew up in Germany with a cruel father who served the Nazis during World War II. The film allows ideas to breathe without exposition and yet it is not a stretch to presume that Ingrid’s preference for non-human companionship might stem from her childhood experiences with her father. At one point she remarks, “My father beat us. I use that word specifically. … My father was a sickness that had nothing to do with being German. His timing was good to be who he was, to get away with who he was … because it was supportive of that kind of behavior. They were looking for people like him.”

The filmmaker edits together a narrative of Ingrid’s life that allows for ambiguity and philosophical reflection of the human experience beyond Ingrid’s story. The film is highly recommended for its aesthetic excellence to be incorporated in any documentary or film studies program, as well as a tool for a course in philosophy or Women’s Studies.