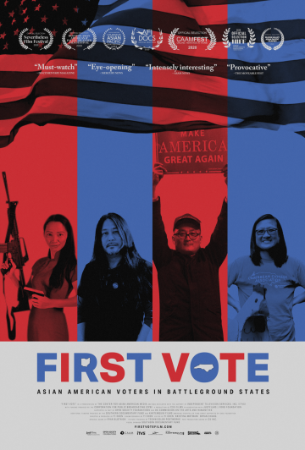 Using the stories of four politically engaged voters with opposed politics, the film explores Asian-American voting patterns, identity, and race. The film deftly dismisses the idea of a unity Asian-American experience while exploring critical race theory through the lens offered by Professor Jen Ho of the University of North Carolina, Chapel Hill. The documentary takes us into her political activity and her classroom, where she teaches a course on Asian American identity. Indeed, the key to understanding this documentary is the question of identity. Where do Asian Americans fit? A marginalized minority or a group that has easily assimilated into U.S. society? The filmmaker forces the viewer to grapple with this question as they follow the storyline.

Two of the voters are progressives. Dr. Ho is dismayed by those around who identify with Donald Trump and conservative ideas, and Kaiser Kuo, who was born in New York City but lived in Beijing for twenty years before returning to the U.S. and settling in North Carolina. Kuo, who co-founded the Sinica Podcast, is shocked to find how many of his neighbors and fellow Asians are adherents to Trump. He is determined to change their minds. Kuo and Ho see themselves as a marginalized group, and they sympathize with those who are neglected and oppressed by society. Trump is the epitome of the kind of privilege they detest.

On the other hand, Donald Trump is the ideal candidate for Sue Googe, a one-time Republican candidate for a House seat in North Carolina. She embraces the idea of American freedom, and her campaign featured her carrying a rifle. She admires the ideals of the Republican Party, an idea that many of her Asian-American friends share. It is also the ideal of Professor Lance Chen of the University of Dayton, who uses his podcast to extol the virtues of the Republican Party. Their identity is clearly as American, which one might also read as white. They see themselves as legal immigrants who have earned the right to succeed and are suspicious of those who claim the American Dream is not alive.

The cinematography is good. The individuals well-defined by their own words, and Yi Chen allows the viewer to determine for themselves which pair of voters have a better grasp on U.S. society. This film will generate a great deal of discussion about identity, Asian-Americans in U.S. society, and American politics. At 59 minutes, it is suitable for a middle school to college classroom or community viewing in a public library or other settings. Highly Recommended.