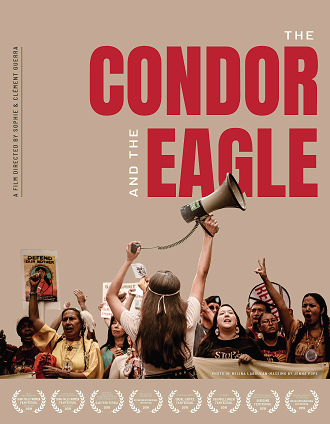 The Condor & The Eagle documents four Indigenous leaders across the Americas who fight for environmental protection and unite the peoples of North and South America on their paths of activism. The title is based on a prophecy of the Amazon about a split of human societies into two different perspectives, that of the Eagle representing the mind, the industrial, the masculine, and the Condor standing for the heart, intuition, and feminine. The Eagle gained too much power and needs to come together with the Condor again to save humanity. In the film, this prophecy is represented by the Indigenous peoples oppressed by the exploitation of oil companies and the energy-hungry lifestyle of the modern world. We see powerful images of oil refineries spilled out across the Canadian plains in Alberta and Vancouver, poisoning poor neighborhoods with their health damaging emissions in Texas, and destroying Native homelands in Oklahoma for more pipelines. We accompany these mostly female leaders to the jungles of the Amazon in Ecuador and Peru to discover the dirty secrets of the oil industry and how they cover up the destruction of nature with a complete disregard to the ecosystem or the safety of the people who live there. The Indigenous are no longer willing to be ignored or expelled from their lands by greedy and destructive forces. They fight back with modern networking tools to preserve not only their way of life that is much more embedded in nature than the exploitive forces will ever be, but try to restore the health of the planet for all of humankind.

The film points out that the beauty and essence of the land needs to be seen and experienced first-hand to be valued and protected. This is difficult since the wide-spread detachment from nature in the increasingly urban ways of life pushes the climate crisis and ongoing environmental destruction to the periphery of daily awareness. The next best option is to watch films like this one to heighten our understanding of the importance and pressing issue of sustainability and political engagement. This documentary is expertly filmed and combines beautiful images with interesting personal stories. It gives voice to powerful leaders and provides insight into the importance of networking and the effectiveness of global collaboration. We learn how the First Nations come together to combine their activism and civic engagement in a global force to resist an exploitative and unsustainable economy that hurts us all, and for which we need to take responsibility. Our interconnectedness with one another and our planet is well documented. Just as in the myth, the Eagle must join the Condor for the survival of humanity.

Considering the continuous expansion of pipeline projects and other destructive developments despite the urgency of the global climate crisis, this documentary is a valuable and important resource for a wide range of subjects. Environmental and political science, but also economics and business ethics as well as sustainable development courses are well suited opportunities to teach and learn about the issues covered in this film. The different perspectives presented in this film can serve as an introduction to these pressing problems, but also as inspiration to join this connecting movement and work together on solutions that take all lives into account, as well as the environmental cost of our consumption.