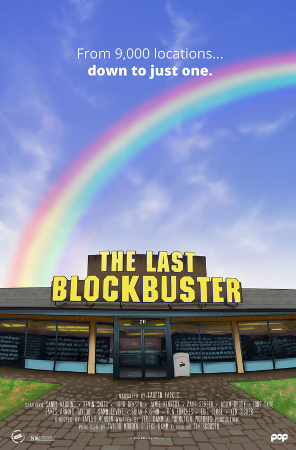 At the height of Blockbuster video’s dominion over the video store rental industry there were approximately nine thousand locations open providing entertainment to the masses. The Last Blockbuster tells the story of the only remaining store in Bend, Oregon using archival of television shows referencing the iconic franchise and news clips reporting the company’s downfall interspersed with interviews from various celebrities and comedians, a few knowledgeable Blockbuster insiders, and vérité footage of the manager of the last Blockbuster, Sandi Harding, as she runs the store and awaits information from “corporate” about its fate.

Director Taylor Morden creates a stylistic documentary, opening the film as though a VHS tape were starting to play and embedding clips in a television set which appears to be more reminiscent of the seventies than of the eighties or nineties, but nevertheless is clearly a throwback to entertainment of days gone by. Voice-over skillfully rendered by actress Lauren Lapkus provides upbeat narration summoning memories of commercials from the eighties and early nineties, with a tongue-in-cheek tone throughout. Reenactments with puppets of a faux meeting between Blockbuster and Netflix, the over the top sentimentality of some of the celebrity interviews and a buoyant score all evoke a mockumentary akin to Rob Reiner’s This is Spinal Tap or a Christopher Guest film - but without the clear arc and character development.

The subject of Blockbuster as a popular culture enterprise, which during its heyday had quite a bit of power and influence over American entertainment, could be approached with more thorough analysis without necessarily having to leave behind the comedic elements in The Last Blockbuster. One of the interview subjects, Lloyd Kaufman President of Troma Entertainment, briefly provides a counter narrative to the nostalgia by snarkily berating Blockbuster corporate but there is no further mention of the more nuanced issues at play. At the height of Blockbuster’s power, studios often found themselves editing versions of their films in response to the video rental company’s demands. I myself have spoken to one filmmaker who had her ending changed (fortunately for her to the one she wanted) because Blockbuster weighed in. Most directors, however, were not so pleased with the input of the video company. Film “sanitizing” for certain markets may not have been specific to Blockbuster but it was certainly part of the discourse at the time.

One of the highlights of The Last Blockbuster occurs as manager Sandi Harding fixes old computers which she can no longer get serviced. She jokes about explaining floppy disks to her young employees as she switches out parts necessary to keep the proprietary Blockbuster computers up and running since no other outlet can provide her with the necessary hardware. This leads the movie to explore the issue of films only available on disk and lost to the streaming viewer, touching on the importance of analog materials and how ephemeral stories can be without distribution. Nevertheless, similar to other elements of the film, the surface is barely scratched.

The assumption that Blockbuster was brought down by Netflix is presumably debunked in the film by the former CFO of Blockbuster, Thomas Casey, who claims that before the economic crash of 2008 when “the world went to hell,” Blockbuster was equally positioned to succeed. Casey admits, however, that Blockbuster had debt, brick and mortar stores to maintain and an established business model which required restructuring whereas Netflix had capital and as a newer company was of course more agile. A deeper inquiry into those realities might acknowledge that Netflix was likely able to take over the industry because it was in a better position to do so - but the film often introduces snippets for further investigation and then drops them, quickly shifting to comedic nostalgia in order to maintain the superficial fun of the film.

Older viewers looking to muse over their days going to the video store on a Saturday night or younger American suburban millennials or Generation Z audience seeking to get a taste of the experiences of their ancestors may enjoy this film but for an academic audience seeking in-depth analysis of the popular culture phenomenon, unfortunately The Last Blockbuster is Not Recommended.