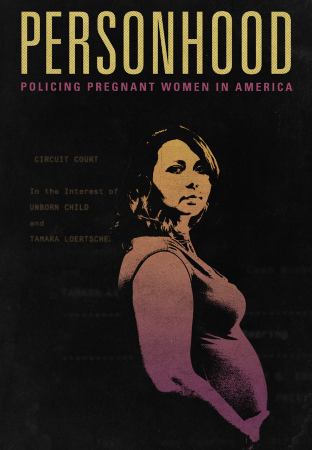 Personhood: Policing Pregnant Women in America presents a unique look at the reproductive rights debate, expanding beyond the question of the right to abortion, and explores the way in which women’s rights can be dismantled in the United States by redefining the legal definition of personhood through statutes and case law. Filmmaker Jo Andinger investigates the movement for “fetal rights” or personhood for the fetus and how it undermines the rights of women, especially pregnant women. She provides an array of perspectives using archival footage and interviews that include the founder of the National Advocates for Pregnant Women (NAPW) Lynn Paltrow and the founder of Personhood USA Keith Mason, approaching the issue from various angles. The film successfully explores the subject in a traditional documentary style that opens by introducing the main character, Tamara Loertscher, through whom the filmmaker personalizes the repercussions of the personhood debate. It then pivots to providing a larger context of the issue as it has evolved since the Roe v. Wade decision where Justice Potter Stewart questioned during oral arguments, “if it were established that an unborn fetus is a person within the protection of the 14th Amendment, you would have almost an impossible case here, would you not?”

Once Abdinger succinctly establishes the topic using archival audio, graphics, interviews and news clips the narrative delves into the repercussions of the 1997 Wisconsin Law known as the “Unborn Child Protection Act” which gave the state the right to incarcerate Tamara in the interest of “protecting” the “unborn child.” Documenting Tamara’s journey, from the initial news of her pregnancy and her seeking medical help through to her ongoing legal battle with the state, the film highlights the deleterious effects of fetal rights statutes on women. Tamara’s story is also placed in the broader framework of the personhood debate by those who represented her in the case - legal experts from the NAPW, and other advocates for women such as Cherisse Scott, founder and CEO of SisterReach, Arthur Caplan, PhD, a bioethicist from NYU, and activists in the anti-abortion debate who see the establishment of fetal personhood as a way to end abortion in the United States.

Thus, the documentary provides an emotional connection through Tamara’s story but extends well beyond the individual narrative to show how the question affects women and society at large, the intersection of class and race as it pertains to the personhood movement, and how various states throughout the country have had to navigate the issue. The film is seamlessly edited by Abdinger. Archival sections are cut within the interview pieces to respond directly to what the subjects are saying, basically creating a dialogue between the disparate sources, going beyond a traditional setup where pieces often respond to one another in the theoretical but aren’t necessarily connected as literal discourse in the way that is accomplished with this edit.

As a way into discussing the reinterpretation of the Reconstruction Amendments, the film would be paired well with Ava Duvernay’s The 13th (focusing on the criminal justice system and the 13th Amendment) and Mark Achbar and Jennifer Abbott’s The Corporation (addressing how corporations were granted personhood through arguments utilizing the 14th Amendment). The in-depth analysis in Personhood: Policing Pregnant Women in America which touches on several legal and societal questions makes it an ideal film for a variety of courses - Highly Recommended.