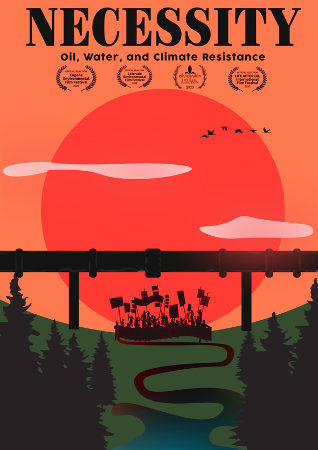 Oil pipelines pose tremendous dangers to the environment and to the inhabitants of communities through which they travel. Still, their expansion remains almost unstoppable, despite repeated outcry over the desecration of tribal lands. Necessity: Oil, Water, and Climate Resistance highlights activist efforts by indigenous leaders and non-indigenous allies as they attempt to protect their land. In a profound but understated act of civil disobedience, a small group of activists close the valves for the pipelines responsible for transporting oil from the Alberta Tar Sands across North America. What follows is an innovative use of the necessity defense, as a team of lawyers representing the valve-turners argues that the valves were closed in order to prevent the greater harm presented through the numerous effects of climate change. Through interviews with scientific and medical experts, as well as moving conversations with members of the indigenous communities, Necessity shows how apt this legal strategy might be.

Although the film takes pains to explain some of the legal concepts and proceedings on which the narrative surrounding the court case hinges, viewers may still find themselves needing answers to questions about criminal law in order to understand some points. For example, knowing the contexts in which a necessity defense is typically used sheds light on just how creative the application is in a scenario like this one. At one point, the legal team expresses dismay over the case against the valve-turners being tried before a judge, rather than a jury, but the reasons given for exactly why this is a disappointment are unclear.

Still, the larger point to be made by using the necessity defense in a criminal case against environmental activists is an elegant one: climate change poses an imminent threat to all life on the planet and current legal means fail to adequately protect people. The film consistently and clearly brings this idea to the forefront, with no overview on the finer points of criminal law needed. The images of pipe leakages are bracing, but it’s the animated map showing the pipelines’ proliferation that’s especially gut-churning; they’re everywhere and, as we learn from multiple experts over the course of the film, the harm is everywhere too.

Necessity is a thoughtfully done portrayal of indigenous activism around an urgent environmental issue. It’s sure to generate engaging discussion when used in classroom settings and is highly recommended for academic and public libraries.