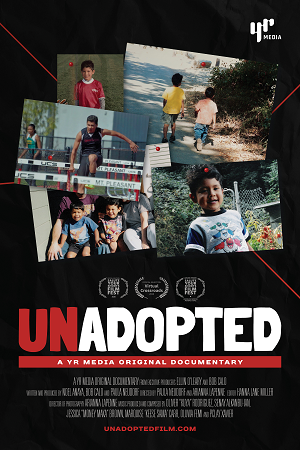 What does it mean to be “unadoptable”? Adoption rates for teens in foster care are shockingly low. Many kids as young as twelve find themselves stuck in a system of permanent foster care when those charged with finding them forever homes give up and deem them “unadoptable.” Producer Noel Anaya was one of these kids and he bravely tells his story in his documentary short film Unadopted.

Noel reveals how a system that was originally designed to provide temporary homes for kids and families in crisis is failing them and often causing permanent damage instead of helping them at a critical developmental time in their lives. Anaya seeks to find out what happened in his case and to others who got stuck in permanent foster care abandoned by a system unable and unwilling to fight for them. Often referred to as “aging out” Anaya chooses to use the term emancipation as it has a more positive and hopeful connotation. After all, it is not the kids who have failed to get adopted but foster care which has failed them and of which at 18, they are now free.

While only a brief 33 minutes, this documentary dives deeply into the many related areas of the failed foster care system such as the permanent trauma kids experience when families are broken up. Kids languishing in permanent foster care are at greater risk for incarceration and of repeating the cycle of abandonment and neglect that they endured as children. Anaya discovers the system gave up on him when he was eleven years old deeming him “unadoptable.” He was labeled with medical diagnoses he did not understand nor was even aware of that may have played a role in the system failing to find him a permanent adoptive family. Kept from his siblings and his mother Anaya does not discover the lengths she went to try to maintain some kind of relationship with him during his time in foster care until after his emancipation.

Unadopted packs a punch yet leaves the viewer somewhat hopeful due to the filmmakers decision to showcase the positive outcomes for kids who have successfully survived the system either through emancipation or in one rare case adoption at age sixteen. This film will resonate with students from high school through college and would complement course work in children/family/youth studies. It is equally valuable to adult viewers inspiring the desire to get involved to change this broken system.