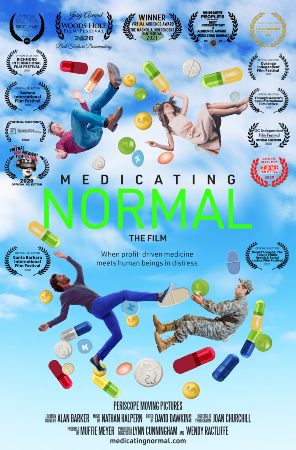 Normalcy is something many people strive for; the ability to think and to feel “regular.” However, the definition of normal is merely in the eye of the beholder. What if it is just the ability to exist without feeling consistently overwhelmed, anxiety ridden, stressed out, or unequipped for any day in the life? Perhaps this is so, in which case, did you know there are pills for that? Lots of them too…

Medicating Normal is a documentary that delves into the interworking of Big Pharma through the lens of four individuals and their personal experiences in being overmedicated. In a society where, “1 in 5 Americans take prescribed drugs each day,” it is not uncommon for an individual to rely on medication for some sense of regularity. In that vein, it comes down to what medication is being prescribed for what condition and by whom. Within the film, the viewer hears the stories of everyday people who were given countless cocktails of medications for conditions like anxiety, depression, PTSD, sleep disorder, anorexia, among a laundry list of others. Each individual tale is alarming. Despite whatever ailed them, a doctor promised certain relief. In stark contrast, the pills made each situation worse due to the lack of information provided about potential side effects, thus exacerbating their symptoms and even changing their diagnosis altogether.

The film, which is more informational than exposé, manages to intersperse interviews and background of the affected individuals with perspectives from leading psychologists and psychiatrists. What the viewer begins to see is that the idea of “normal” may have just been confused with “comfortable.” One doctor remarked that most people have a short-term stressor that is making them feel terrible, which will typically go away within a month. Since drug companies often advertise magic bullets for treatment, some opt to be treated with something they think is a sure thing, a quick fix. Instead, the lack of informed consent for some has led to addictions to benzos that are terribly difficult to wean off of.

The directors broadcast a message that sometimes suffering is the only response to a painful situation or mental oppressors, no matter how bad it hurts. The real healing comes with time, patience, and the correct support systems. Be that as it may, if medication is prescribed correctly, it can do wonders for those who need it. That is where the film manages to enlighten viewers about Big Pharma’s grip on treating mental illness while also championing the idea that not all pills are bad.

Medicating Normal is an incredibly interesting film for any academic library and acts as a warning to be more aware of what people put in their body. Old advertisements from drug companies are juxtaposed with pertinent longitudinal statistics and information from medical experts and real-life stories. Its themes of mental health, psychology, and the pharmaceutical industry are hot button topics for the classroom. In addition to the film, there is an accompanying discussion guide for instructors. Viewers should take note that the film contains some profanity and stories of self-harm and violence.