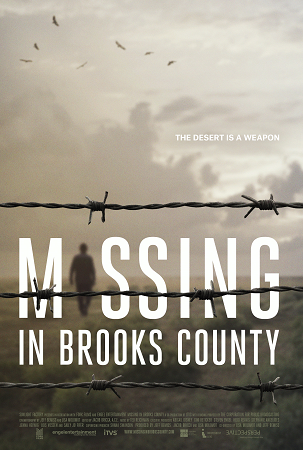 Brooks County is home to the Falfurrias traffic checkpoint, located 70 miles north of the Rio Grande River. As the U.S. Customs and Border Control Protection states on its website, “The Falfurrias TCP is nationally known as a primary leader in seizures, both alien and narcotic apprehensions.” This checkpoint is the root of why people are missing in Brooks County, the story told in this focused documentary on the living, missing, and deceased individuals whose paths have crossed Brooks County. The film begins with Eduardo Canales traveling through terrain that is “rough, brush and crude vegetation with numerous mesquite and oak trees” in the words of the Customs and Border Control’s website. Canales, who works for the South Texas Human Rights Center, is supplying water stations and searching for missing migrants, two of the areas of focus for the Center and for the film.

The other area of focus in this film is forensic anthropology. The Center works with Dr. Kate Spradley and a team of anthropologists as they try to identify unknown migrants. This seemingly ever-increasing work involves locating unmarked graves and seeking families of these migrants in order to verify DNA. It is also work with an emotional toll: not just for anthropologists, but for the border agents and local law enforcement.

All of these areas – understanding the importance of water stations, the process of locating missing migrants, and the work of forensic anthropologists - are critical background knowledge as the film follows the search for Homero Roman and Juan Maceda Salazar in Brooks County. The journey of these two men from Mexico, and their families’ laborious search, anchors the film’s narrative until its eventual conclusion, and revelation of what happened to these men.

The strength of Missing in Brooks County is that its narrative is centered on Brooks County, and specifically, the migrants and individuals who are involved in border related issues. While the U.S. Customs and Border Control Protection is omnipresent through the circumstances contextualizing the film, it is the local agents doing their daily work who are depicted. This is an example of how succinctly Missing in Brooks County portrays one area of the U.S. border. Given how complex this one area of the U.S./Mexico border is, one gets a sense of the immensity of the challenges not only in this border, but in larger areas of U.S. migration.