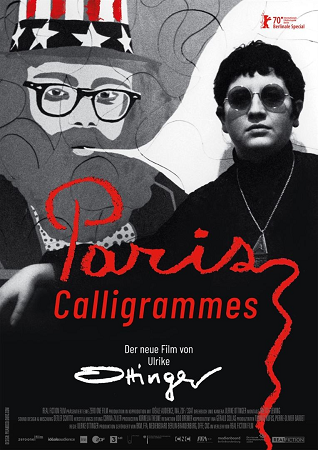 After approximately 50 years, filmmaker Ulrike Ottinger returns to Paris where she spent the years 1962 - 1969 as a young artist. The anecdotes she shares of her time there are entwined with an encyclopedic array of people, places and details that serve as a timestamp of the city’s cultural ethos. The story is divided into ten chapters and an epilogue. It is told through a wealth of archival footage from interviews to street scenes, parades to nightclub acts. This content is juxtaposed with modern-day footage, as well as feature films, documentary clips, music, photographs, and displays of art in many, many forms. While some chapters are devoted to Ottinger’s evolution and influences as an artist, the film also explores cross sections of ethnography, politics, and the modern impact of France as a colonial empire.

As a documentary it is an outstanding resource, with a cast of historical figures and world events woven into a plot with enough breadth to encourage discussions not just about art and artists, but about war, class, oppression, and multiculturalism. However, the film also demands an intermediate level of knowledge of art history, French history (colonial and 20th century), and often the French language itself, therefore it is Recommended with Reservations.

The film references a dizzying quantity of individuals – writers, journalists, poets, painters, sculptors, actors, performance artists, photographers, architects, filmmakers, philosophers, economists, pacifists, political activists, soldiers, etc. – from various European countries. It covers broad art movements including Dada, Surrealism, Expressionism, Pop Art, and Cinema Verité, all the way to specific etching techniques like Aquatint. It covers incidents including the Algerian War, the Paris Massacre of 1961, protests at the Odéon-Théâtre de l'Europe over Gene Jenet’s play Les Paravents, and May 68. Yet subtitles are used sparingly on chapter headings and interviews, and photos sometimes don’t have captions. Additional subtitles clarifying Parisian locations (for example, the Palais de la Porte Dorée now the Cité nationale de l'histoire de l'immigration), French terminology (for example, Pied-Noir), or instances where only the last name of an artist is referenced, would be extremely helpful. In other cases, famous faces appear briefly in archival footage, but if the audience doesn’t know who they are looking at, it’s a lost opportunity to identify them (for example, a quick wink to the camera by Eddie Constantine).

On one hand Paris Calligrammes could be a fantastic introduction to this stunning variety of topics, but on the other hand, at over two hours long, it could be an overwhelming experience for an audience unprepared for such depth. It is unfortunate that there are no accompanying lesson plans or educational materials that would help supplement the viewing for audiences less steeped in the film’s areas of expertise.

Three different narrations were recorded, in German, French and English. Audiences fluent in German may like to know that Ottinger herself narrates that version.