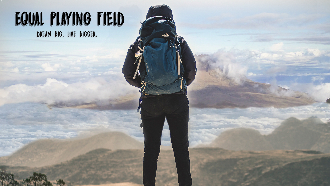 Founders Laura Youngkin and Erin Blankenship pushed the idea of a project to climb Kilimanjaro in Tanzania and play the highest woman’s altitude soccer match. They contacted the Guinness Book of World Records and were told that they had to play a full FIFA game with referees and a regulation pitch to bid for a world record match. They wanted to represent various age groups and different countries to participate. Women soccer players from around the world wanted to join this game and demonstrate the importance of women’s sports. Striving to represent multiple areas of skill, age groups, talent levels, multiple countries, they invited players from Nepal, Saudi Arabia, Mexico, Brazil, Jordan etc. some choosing to participate even in the face of their government’s opposition. The overall theme of the film is that sport can changes culture, often being a site of inclusion and opportunity ahead of other aspects such as the workplace, housing, gender etc.

Besides the documentary itself, Full Altitude Football is one outcome of this original project to play a women’s soccer game at high altitude and low altitude. This is a metaphor for the struggle to get women’s sports to be seen and valued.

The Kilimanjaro Match; highest point.
The climb over Kilimanjaro begins early in the morning, to get to the pitch. The route up Kilimanjaro takes the players a week. The team risks altitude sickness along the way, and during the game. There is a female Kilimanjaro guide, who is one of the few among guides. The pitch will also have oxygen available for the players during the match.

The first night on Kilimanjaro, some of the group are already exhibiting symptoms of altitude sickness, such as headaches and the temperature is already low, and will get lower as they climb. On the 2nd day they are at 12,600ft. The altitude sickness symptoms are becoming more prevalent each day. There are members oof the group pushing through pain to continue to climb, and there is one day of hiking to reach the summit.

One of the details of the game that is that they get an “extreme environment breaks halfway through each half of the game, which is basically a break to rest and get a drink. The match is played, and some players drop out due to the altitude.

The Dead Sea Match: lowest point
Also, the players offered soccer camps for girls, exhibition matches in Jordan and doing an 80-kilometer hike, which mirrors the Kilimanjaro hike. In 2016 Jordan hosted the FIFA under 17 World Cup - the first Women’s Tournament in the Middle East. One concrete outcome of the Dead Sea match was a regulation field donated to the town bordering the Dead Sea. Since 2017, in Jordan, there are PE classes in school for girls, females are allowed in soccer stadiums, and there are sports opportunities for girls.