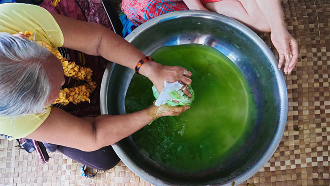 The Healer and the Psychiatrist 2019

The Healer and the Psychiatrist explores two mental health treatment models (traditional medicine and psychiatry) practiced on Vava’u, a group of islands located in the southern Pacific Ocean.

After experiencing an illness when he was younger that was resolved using traditional healing methods, Dr. Mike Poltorak, a medical anthropologist, chose this region for research on social causes of sickness. Dr. Poltorak filmed, produced, and directed this documentary.

We are introduced to Emeline Lolohea, ‘The Healer’, and Dr. Mapa Puloka, ‘The Psychiatrist’. Emeline does not charge for her services and uses traditional Tongan medicine practices in her work. Mapa uses a different approach in his treatment methods, bringing more of a Western medicine framework to his clinical practice. Trust and communication are shaky between Tongans and hospitals/clinics.

Mental health issues are attributed to tevolo, or dark spirits. Tongans who receive traditional medicine during treatment experience less of a community stigma, but Mapa sees his psychiatric treatment as complementary to traditional medicine and works to promote its use through group therapy, where patients gather and talk while drinking kava, and occupational therapy, where patients grow their own food and work with the land.

The film uses flashback footage and historical videos to supplement the more recent footage of Emeline and Mapa using their respective treatment methods. Non-intrusive camera work and judicial use of subtitles contribute to the respectful tone of the film. The Healer and the Psychiatrist is a languid film; the pacing showcases the deep caring inherent in the two practitioners’ different health care styles.

This is not a divisive film. Although the Healer and the Psychiatrist have never met in person, the film explores the relationship between traditional Tongan healers and doctors, and promotes the message of building complementary, not adversarial, relationships between the two. The ultimate goal of both health care practitioners is culturally appropriate care for their patients.