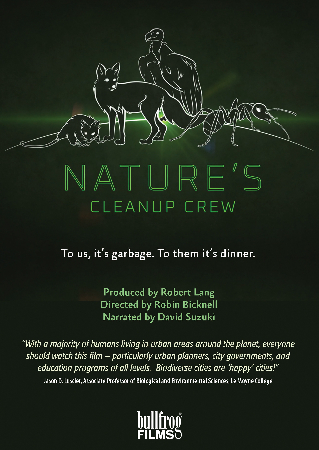 As a native New Yorker, did you know that there are 23 different species of ants on Broadway in New York City? Or that even though New York boasts of about 8 million people, ants boast even more with 1.2 billion. This film takes an intriguing look at the various insect and animal scavengers that reside in many of our urban and rural cities around the world. This film starts with what are called ‘pavement ants’ and illustrates why they are called ‘nature’s cleanup crew’ getting rid of what we call garbage or waste we produce every day; the viewer then travels to Berlin where the fox is shown how it helps reduce the rabbit and rodent population. As we encroach even further into lands that occupy many of these creatures, great and small, our interactions with them, is often troubling creating what can be termed habitat loss of creatures needed to scavenge animal remains and garbage we tend to leave around.

For many of the scavengers shown in this film, it becomes abundantly clear that they play an important role in the food web. They keep our ecosystem free of the bodies of dead animals and plants by breaking it down and recycling it back into nature as nutrients. They play an important role in maintaining a healthy habitat. This is an important film about creatures and insects many of us are either afraid of or don’t like. It also shows how important these same creatures are in cleaning up nature.