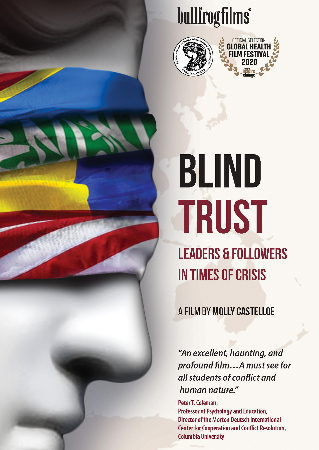 “Old diplomacy does not work anymore.” And so, begins this film on the life and works of Dr. Vamik Volkan, a psychoanalyst, Nobel Prize nominee and emeritus professor of Psychology at the University of Virginia. This film explores severe societal-political divisions and interferences with democratic processes and human rights issues in many locations around the world, including the United States; it attempts examines the role of leader-follower relationships related to such developments. The term "large group identity" is used profusely throughout this film, describes hundreds, thousands, or millions of people- most of whom will never see or even know about each other as individuals, but who share many of the same sentiments.

Large group identity has for many centuries, been the catalyst for the continued animosity and unity between groups; Germans and Jews; Palestinians and Jews; Greeks and Turkish; racial and gender discrimination, just to name a few. This film explores Dr. Volkan’s expertise in analyzing the phenomena of large group identities, and its impact on what is called ‘shared trauma’ by the group; it examines its relationship to massive traumas at the hand of the “other,” its role in national or international affairs, its raising substantial barriers to peaceful co-existence between “enemy” groups. This film also describes what Dr. Volkan calls as “large-group psychology” in its own right.

Dr. Volkan points out that throughout human history many world leaders used words to mobilize the populace to create the best and worst that people can do. September 11th and just recently, January 6th, 2021, are clear examples. The experience, many Americans, naturalized or native, felt, was extreme. How do we deal with large group identities as it relates to a traumatic event like Pearl Harbor, The Manzanar War Relocation Center, Auschwitz, September 11th, George Floyd?

Dr. Volkan further points out that ‘group violence’ experienced in each of these incidents based on ‘blind trust’ continues to occur even without a long history of defining ‘us’ and ‘them’. Chosen trauma, according to Dr. Volkan, is at the heart of chosen identity and group conflict. Serbia and Bosnia are examples of this continued conflict relived by many Serbians and Bosnians through an ancient battle between these two nations. This film is both intriguing and troubling; it rips at the heart and asks, “how can we as human beings reconcile, if we cannot heal individually and collectively to the atrocities, we have visited upon one another as groups?”