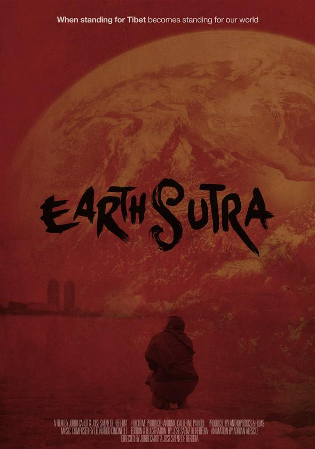 When I first viewed Earth Sutra, for whatever reason, I thought of the old TV series, Kung Fu, with David Carradine even though the star of this series is fleeing China in search of his brother, not Tibet. What is the first thing that comes to your mind when you hear the word Tibet? You might imagine tranquility, expansive green grasslands and rolling hills, wild yak, Tibetan antelope, blue sheep, and wolves.

This documentary film illustrates what dictatorship means in Tibet when the newly established Communist regime in China invaded this country in 1949. Tibet is rich in natural resources and closely borders India. Life in Tibet prior to the invasion of China, was simple. Modernization was unheard of because many of the Tibetans lived simple but peaceful lives.

The film explains through historical vignettes, how the Chinese government continues to deny many Tibetans the right to speak freely, choose their way of life and many of their cultural practices passed down from generations to generations. Many Tibetans see the Chinese occupation as the exertions of a powerful government to usurp their land, country, and culture.

Through the voices of such people like the Dalai Lama, (in exile), writer and photojournalist, Mikel Dunham, Richard Gere (Actor/Activist) and Dr. Lobsang Sangay, Tibetan Prime Minister in Exile, the atrocities of the Chinese government are clearly shown. Many Tibetans then and now want to acquire global relevance and autonomy even before the Chinese invasion in 1949.

And while many countries including the United Nations, consider the occupation of Tibet by China illegal, it has not lost its statehood in the eyes of the global community. At the same time, it is considered an independent state under illegal occupation by the Chinese government.

Through the voices of concerned politicians, and activists around the world, a critical light has been shone on the actions of the Chinese government regarding Tibet. Until there is a unified effort on the part of the major powers of the world to address the illegal occupation of Tibet by China, Tibet will continue to fight peacefully against the Chinese regime to destroy their identity and way of life.