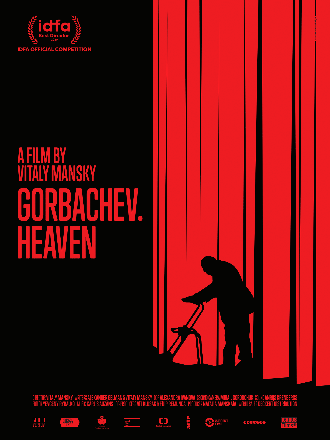 Gorbachev's heyday was in the 80s during his world-changing reforms; this film shows him at home, almost 90 years old, reflecting on the loss of his wife, Raisa, (1999) and the disunion of the Soviet Socialist Republic (1991). He does not own his home; it was given to him by the state “for life,” but seems to be content in it. His friends installed an elevator to assist him in getting from his bedroom to the downstairs. You could view his struggles to stand and walk as a weakness, or, given that he gets to where he intends to go despite the struggle, you could view him as a man of great intent that does not give up. Raisa’s portrait hangs on the wall and oversees the quiet conversations between the writer-director Vitaly Mansky and one of the most important leaders of the 20th century. While the film probes his political legacy, it is not an instructional piece that provides historical detail. It is rather a portrait of a man through conversations and observations.

The documentary was released in 2021 but filmed mostly prior to the pandemic; the holiday scene includes a television speech by Putin celebrating the incoming year 2020. One of the final scenes shows a make-up artist wearing a mask --an indicator of the pandemic. Despite its slow and contemplative pace, full of quiet scenes and pauses, it did not feel overly long. The film is edited into about nine sequences that I summarize as follows: 1. A dialogue between Mansky and Gorbachev about democracy and freedom in Russia (at home); 2. Lunch with a discussion of money, poetry, youth and the meaning of life (at home); 3. Remembering Raisa, youth, Stalin and joining the Communist party (at home); 4. Dialogue with Mansky about Andropov, Brezhnev, Perestroika, and the collapse of the USSR (at the Gorbachev Foundation); 5. Interview by a playwright and two actors about his relationship with Raisa (at the Gorbachev Foundation); 6. Attending a New Year’s Eve party with friends, thinking about the future (at a friend’s apartment in the city); 7. Gorbachev’s resignation speech acted (in the theatre); 8. Graveyard scene; and 9. Refrain of the song of Gorbachev’s mother (field and rivers). At the point the film changes from Gorbachev’s house to the Foundation, Gorbachev was hospitalized but accommodated the filmmakers since he regards the film as important, even while often showing dismay at the questions. The difficult interview about the collapse of the USSR is followed by happier scenes with actors who praise him, and later with a gathering with friends. The film portrays a man well aware that he is in the winter of life.

The heaven in the film’s title comes from the Ukrainian song that we hear Gorbachev sing: “The mountain is high / And there’s a forest under the mountain / A green and thick forest / A real heaven.” This song is significant as his mother used to sing it to him, and he would also sing it as he shaved with Raisa listening. It is a song about the passing of time, but it is associated with fond memories. One memory related during lunch, was of how he and Raisa lived in Stavropol: “Winds were blowing from the steppe. The fragrance was simply intoxicating, incredible. Raisa and I had a habit back then. I drove her car some fifty kilometers from the center, where wheat fields stretched...endless! There you could see the quails mating. Where the cornfields are in bloom as they’re ripening the quails are running mad. Love until death, Oh God. You can live with it.” After that, Mansky comments, “This is a story about how you lived in heaven,” and Gorbachev replies, “And now, hell.” He often laughs after such quips, and it is hard to gauge how seriously he means such statements. The final scene poignantly illustrates that song of his Ukrainian mother about how seasons change and renew each spring, but people cannot return to their youth.

We learn a lot about Gorbachev’s personal history, personality, and beliefs. The film provides him an opportunity to share his experiences firsthand. At the beginning of the film, we learn that he still is committed to socialism. We also learn during the film about his, and his wife’s, heritage from both the Ukraine and the Soviet Union (then known as the Ukrainian Soviet Socialist Republic). His grandfather was nearly executed by a firing squad when he was young; he was absolved of his alleged crime but was tortured when imprisoned; Raisa’s grandfather was executed. Such experiences must have influenced his character towards compassion and understanding. His love of poetry is expressed and endearing; we hear him recite and sing. We see him at a New Year's party at a friend’s house; in the simple gathering, he connects with his friend’s little dog Fabio. After some questions about the New Year's he asks Fabio: “Why are they pestering me, eh? Shall we probably bark at them? Or not? We’ll still need them.” His deep and enduring love for his wife, Raisa, inspired a playwright and actor to visit him seeking input into how it all began. I gather they were the type of couple that lovingly sparred with one another. Many of his comments are punctuated by his laughter. He has a good sense of humor and often jests with Mansky. In the beginning of the film, after commenting about the effect of solar storms on his health, he jokes, “You can name our conversation ‘A Dialog with a Weirdo’.” My personal assessment as a viewer is that Gorbachev is a romantic and idealistic figure who envisions democracy and freedom for his people since he sees it as a necessity. As he also allowed the union with his country to dissolve without violence and war, you could even call him a humanitarian, one adverse to cruel totalitarian tactics (regarding the attempted coup, he didn't notice as he said, "It means I'm weak. I didn't chop off anyone's head.")

Viewers should come to the film with a basic understanding of Gorbachev’s accomplishments, in particular the concepts of glasnost (governmental transparency, freedom of information) and perestroika (governmental and economic restructuring). They should be familiar with the dissolution of the Soviet Union following these reforms (Ukraine became an independent country in 1991). There are some intertitles explaining key figures and concepts in Soviet history (Stalin, Andropov, Yeltsin, etc.), but they are few (and may move on too quickly to read). Western society applauds the reforms and credits Gorbachev for them, while others, such as current President Vladimir Putin and many contemporary Russian citizens, regard the changes as a weakening of Soviet power and prominence. Westerners that view the film may have difficulty understanding the Russian perspective. While the documentary brings up the question of Gorbachev’s unpopularity and causes him to tear up about that when asked, there is still a lot left unsaid. While Gorbachev can be coy about his legacy, in the New Year's Eve party scene, when the Russian anthem plays, he repeats the phrase “Free Fatherland” and smiles, “and who brought freedom?”

The cinematography, sound and editing work together to break up the sequences of the film. Gorbachev is not always the center of the shot, and the camera incorporates the entire room. Frequently we see paintings, photographs, and the television used to punctuate what is being said; Raisa and Putin appear often as if they haunt him. The lighting is often dim, giving the film a realistic feel. Quiet shots outside the house, streetscapes in the city, and the bustling workers in the office give the film a personal intimate quality that provides a clear environmental context. Assistants, servants, chefs, and sometimes the film crew appear in the scene to make you feel you’re on set. The music is gentle and appropriate and is most noticeable when an explanatory intertitle is included.

The audience for the film are those interested in the problems of democracy (hopefully most people), historians seeking to understand the character of a leader, and political scientists hoping to hear answers of how decisions were made behind the scenes. What motivated him to push for openness and transparency? While the film does not offer specifics (such as economic or social pressures), one can get a sense of Gorbachev’s values; he offers the achievements of peace and freedom as markers of the success of his policies. If to gain peace meant giving states more autonomy, then so be it. If to gain peace meant to confer with President Reagan, then so be it. While he hoped that the Soviet Union would remain united (as understood in his resignation speech), he does not regret his decision since the goal of peace was accomplished. He states about Russia, “We live in peace, in peace we live.” It was not mentioned in the film, but Gorbachev was awarded the Nobel Peace Prize in 1990. Regarding his successors, Yeltsin and Putin, he provides anecdotes that indicate he is disappointed in their behavior and have parted ways with them.

My one criticism is that I would have liked to have seen Vitaly Mansky in two critical scenes: 1. during the initial scene discussing democracy and freedom and 2. in a later scene in the Gorbachev Foundation discussing politics. Mansky is a character in the documentary; he is the interviewer and writer, and it would have been nice to see him as he remains off camera throughout his exchanges with Gorbachev. There are tense discussions between them where Mansky pushes his subject about freedom, democracy, and his role in bringing them to Russia. Gorbachev points out the freedom Mansky has to create his documentary and express his opinion. When Gorbachev asserts that Russia has peace, Mansky replies, “We live in a dictatorship, actually.” During the scene where the filming moves from Gorbachev’s house to his Foundation (he has been hospitalized), there is a lengthy voiceover by Mansky that explains the history of the Foundation and sets up the scene of what he hopes to understand: how Gorbachev climbed to the top seat of Soviet power and used that power to change the existing regime.

This biographical film emphasizes two aspects of Gorbachev’s life: his love of his wife Raisa and his life’s work bringing democracy to Russia. His love story inspired a play which is incorporated into the documentary in a clever way; we hear Gorbachev’s resignation speech, which clarifies that, while he wanted to bring freedom and democracy to Russia, he had hoped the countries would remain united. The discussion of his legacy as one who changed his country, and the world is also a story of how democracy is not easy and must be fought for: it is a struggle. The documentary is an important portrait of a leader who contemplates his life’s work, his love, and his legacy. Gorbachev states that, “Life matters most, that’s it. And then there’s how we use it, and how it uses us.”

At the writing of this review in early December 2021, President Biden is set to call President Putin to discuss the build-up of troops on the Ukrainian border. As America must continuously improve its own democracy, President Biden will hold a Summit for Democracy set for December 9-10, 2021. China and Russia, excluded from this Summit, wrote a joint op-ed criticizing it. Perhaps all nations should be invited. The film can also be used to discuss how democracy is constant work beyond more than one lifetime. As Gorbachev explains to Mansky, “...what we have to do, go through and get over. It takes time – years and years, enormous effort and skills. It’s not that easy.”