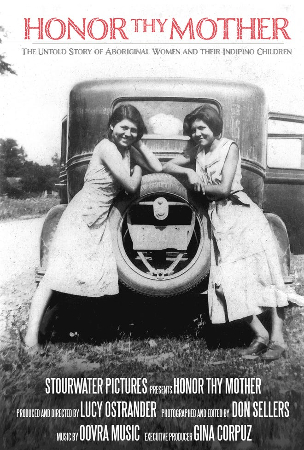 Indian residential schools have been in the news this year as proof of their records of horror have been unearthed and exposed. Due to the high death rates and the many forms of abuse, those students who managed to leave the schools are often called “survivors.” This is the story of some of the women survivors and their families.

Bainbridge Island is located in Puget Sound near Seattle, Washington. In the early 1940’s, much of the land was used for berry farming and owned by Japanese Americans. They hired Philippine men to oversee the farm workers; they in turn recruited Native Americans to pick the berries. Many residential school survivors from both Canada and the United States found jobs there. Some of the women married the Philippinos and their children, being the product of both cultures yet not really belonging to either, came to call themselves “Indipinos.”

In some ways, this is a story about discrimination. There were culture clashes between the Japanese Americans, the Philippinos, and the Native Americans. The Whites, of course, discriminated against all of them. In 1942, the Japanese Americans were all sent to concentration camps. The residential schools had been an attempt at cultural genocide. More importantly, this is a story about survival and the lengths that people will go to in order to survive. Some women did so by accepting the brainwashing of the schools that it was a bad thing to be an Indian and taught their children to suppress that part of themselves. Others fought to hold on to their history and culture. No one can say that each way was right or wrong; what mattered was that each person found a method to survive.

Those interviewed in this film are mainly that second generation of Indipinos since their mothers are no longer with us. The interviews are often emotional as they convey what they and their mothers endured, what survived and what was lost. There is also a narrator to describe the historical events and put the interviews into context. Many photos and old videos are included to help give a feeling of history without distracting from the message.

After watching this film, I was torn between a desire to weep for they had to endure in the past and wanting to cheer because they survived and are now working hard to reclaim their native heritage. The filmmaker has managed to convey both messages in a single and powerful film.