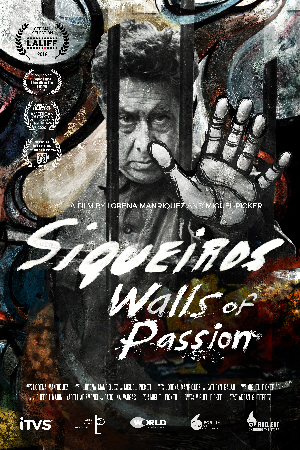 David Siqueiros...the name may not be as prominent as some artists, but as a contemporary of Diego Rivera, he was a master of political mural painting that depicted his fellow Mexicans as a tortured, yet united people. It is difficult to separate Siqueiros from the body politic he associated with, that being the Mexican Revolution and later Communism.

This biopic delves into the world that shaped the muralist. Starting with his upbringing, the film does a fine job with narrating the Mexico of Siqueiros. Each of the major murals that were painted are discussed and several art historians comment on the impact the murals had on society and the public in general. Diary excerpts guide the viewer throughout the world of this remarkable artist. Newsreels and original footage provide essential material for the study of the Siqueiros.

The viewer is left with a sense of what drove the man and the artist. He was imprisoned several times for what he believed in and never backed down. Art was the way he vocalized his beliefs and communicated with his audience. The plights of the Mexican people and the aftermath of the revolution were always a focus with the murals. More political than Rivera and his other contemporaries, Siqueiros' influence on the art world is more than most people realize. Suitable for any student of art in high school or at the college level.