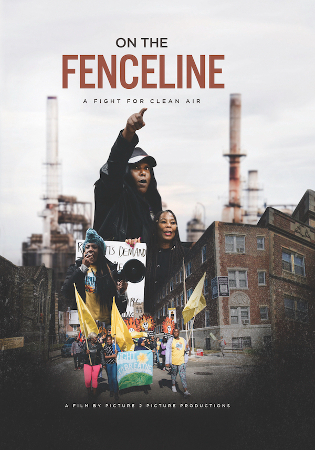 On the Fenceline: A Fight for Clean Air 2021

“Change happens from the bottom up” is the key message of this documentary about how a Philadelphia community came together to fight for their “right to breathe”. The film focuses on Philly Thrive, an activist organization, and its work to mobilize their community in order to stop a major oil refinery from reopening after an explosion in 2019. Decades of exposure to the oil refinery’s pollution has tainted generations of residents with debilitating cancers and lung disease. The residents felt powerless for years, but finally had enough and wanted their voices to be heard after they learned the refinery was being sold.

In a short 25-minute run time, this documentary walks the viewer through the process of gathering folks to protest the sale of the refinery. Along the way, the personal stories of illness and loss of the activists are featured. The narrative of the film showcases the disparities experienced by low-income communities of color. The activists' fight for clean air is strongly juxtaposed against a group of union workers, all of whom are white men, arguing that the refinery needs to reopen for job creation. Even though the narrative is powerful and can spark debate, the film could benefit from a longer run time, as there is more depth to the conversation that seems to be waiting to be uncovered, but ultimately never happens.

This film is a great addition for libraries looking to build collections about social justice, environmental policy, and racial disparities. While the film’s brevity is its biggest weakness, this film can serve as a great conversation starter and may inspire others to think about how they can work with their community to make necessary change.